U2 performs on stage in the ‘iNNOCENCE + eXPERIENCE’ show at the 3 Arena , Dublin. Photograph: Eric Luke / The Irish Times

U2 performs on stage in the ‘iNNOCENCE + eXPERIENCE’ show at the 3 Arena , Dublin. Photograph: Eric Luke / The Irish Times

Bono sprays the audience with water, when U2 perform on stage in the ‘iNNOCENCE + eXPERIENCE’ show , at the 3 Arena , Dublin. Photograph: Eric Luke / The Irish Times

‘Home… I know I’m going home’ is a line from the U2 song ‘Walk On’, and while that particular song wasn’t performed at Monday night’s Dublin show there was a determined sense the tour has landed in the place that not only means the most to the band but which has specifically informed their most recent album.

Looking back isn’t always a creative choice that means lack of new ideas, but in doing so on the Songs of Innocence record – and on the Innocence + Experience tour – the band unsentimentally reference their Dublin past and their place in it.

It was the first of four shows at the Dublin venue after hugely successful North American, European and UK dates.

The show opens with a single light bulb swinging in what purports to be Bono’s childhood bedroom on a suburban street in North Dublin. 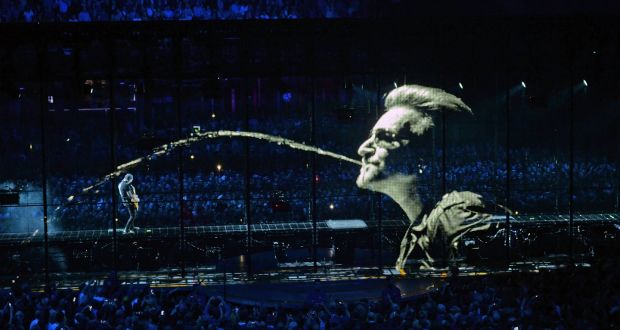 In pictures: U2 in Dublin 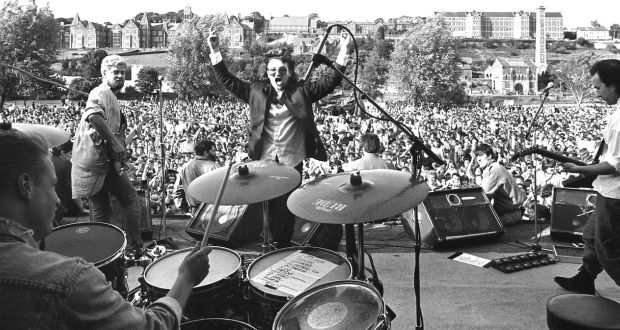 U2 through the years 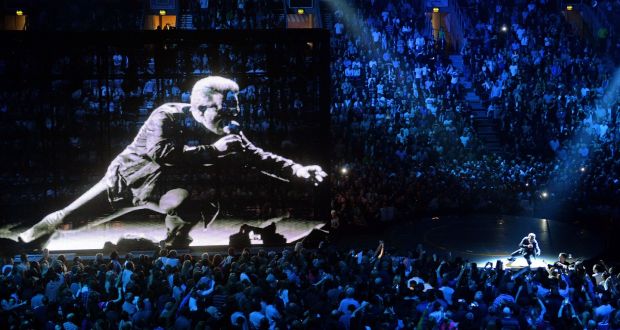 The first half of what is a segmented and staggered two-part show throws some light on the band’s early years via tracks from Songs of Innocence (Joey Ramone, Cedarwood Road, Iris, Song for Someone, Raised by Wolves) and very early songs such as Electric Co and I will Follow.

Social history, personal memories and the political tenor of the times are touched upon, all against a backdrop of yet another immensely innovative stage show that is almost too impressive for its own good.

After the intermission – an open acknowledgement that the show is as much about the theatre of spectacle as it is about careful self-confession – we’re in greatest hits territory.

Over a dozen songs virtually trip over themselves in a contest for supremacy: Mysterious Ways, Even better than the Real Thing, The Sweetest Thing, Every Breaking Wave, Pride (in the name of Love), With or without You, City of Blinding Lights, Where the Streets have no Name .

As an object lesson in how to stir a capacity audience into a lather of sweat, elation and emotion, it’s a seamless, effective piece of work. As an example of rock’n’roll theatre – particularly with a powerful and often mesmerising stage show that on occasion punches the weaker tracks from Songs of Innocence into submission – it is superlative.

Another line from Walk On is ‘Home… where the hurt is’, but with these shows in their native city, their soles on Irish soil, U2 unashamedly admit that it is where the heart is, too.