The peculiar situation of a national opera house in Wexford

The renaming of Wexford Opera House is odd: what’s fine for a festival does not necessarily make sense for a national institution 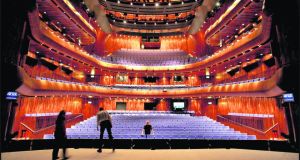 The opera house in Wexford generates opera on just 12 nights a year in a town with a population of about 20,000 in the southeastern corner of the country. Photograph: David Sleator

Spontaneous, unprovoked testimonials are always impressive. I witnessed a few at Wexford Festival Opera last week. Two stood out, both of them coming from seasoned musical travellers.

One was a Wexford virgin, who marvelled at the oddity and uniqueness of it all: an international opera festival in Wexford of all places, a beautiful, modern opera house that you enter from what otherwise looks like an ordinary, small-town street, and a repertoire that focuses on works that are hard to find anywhere in the world.

The other clearly experienced Wexford as a favourite annual destination, a red- letter highlight in a busy operatic calendar, a place to be spoken of with the aura of a spiritual pilgrimage.

The festival has followed a brave and difficult path over the past 10 years. There was the transition from the old Theatre Royal to the new opera house (involving offsite productions in 2006 and 2007) during a 24-month period, which featured three chief executives – the late, much- lamented Jerome Hynes, Michael Hunt, and the incumbent, David McLoughlin – while the new build was under way. And the new house, with its increased capacity, opened in 2008, just as the Irish economy descended into recession.

All of this might have been expected to lead to some kind of artistic retrenchment, but the company stood steadfastly behind artistic director David Agler’s vision, which involves a focus on areas that the festival had never attended to much in the past: opera in English and work by living, mostly American, composers.

The English-language emphasis is to continue next year, when the programme will feature Samuel Barber’s Vanessa, which was first heard at the New York Met in 1958.

The other operas in the 2016 festival, which runs from October 26th to November 6th, are Herculanum, written in 1859 by the Saint-Simonian composer Félicien David; and Donizetti’s Maria de Rudenz, written for the 1838 opening of the second Teatro La Fenice in Venice. It will be the 16th of Donizetti’s 60-plus operas to be staged in Wexford.

It’s just over a year since the Minister for Arts, Heather Humphreys, took the arts world at home and abroad by surprise by announcing that the Wexford Opera House was to be renamed the National Opera House.

This was an inexplicable and peculiar move on any number of fronts. The opera house in Wexford generates opera on just 12 nights a year in a town with a population of about 20,000 in the southeastern corner of the country. What’s fine for a festival does not necessarily make sense for a national institution.

After the announcement I contacted the festival and the Department of Arts to see if the new designation had any implications for the funding and running of the festival itself or for the venue. The answer was no. The department said the Wexford Festival Trust had requested the “national” designation to “enable Wexford to better promote the venue as Ireland’s only purpose-built opera house and as a state-of-the-art opera rehearsal and performance facility, nationally and particularly internationally, among touring opera companies from home and abroad”.

The “changes and developments” the department envisaged had to do with enhancing “the international status of Wexford Festival Opera”, benefits “to the marketing and promotion of the facility on an annual basis”, the accentuation of “Wexford Festival Opera’s leading cultural tourism credentials”, the opening-up of “potentially highly beneficial financial, developmental, and reputational opportunities” as a result of the “enhanced State endorsement”, and the enabling of Wexford “to capitalise on this crucial national status as Ireland’s National Opera House in all of its communications, marketing, branding, promotions, funding pitches, etc”.

Most peculiar of all is that “there are no new or additional obligations imposed on the opera house in terms of the nature or levels of annual programming as a result of the new national recognition”. And, specifically, there are no obligations in relation to Irish operas, new or old. “The new recognition,” the department explained, “does not impose specific national artistic criteria or quotas on the house, as it has not been designated or reconstituted as a National Cultural Institution, such as the National Gallery, National Library or National Concert Hall. However, Wexford is committed to, where possible, enhancing the overall level of opera presentation in the House on an annual basis from composers of all nationalities, including in particular Irish composers.”

The designation of a “national opera house,” has, it seems, nothing to do with national issues, or with opera as an artform, and everything to do with Wexford, and opening up what the department calls “the opportunity for the House to present detailed funding proposals for the capital maintenance and renewal of the facility to the department for consideration, if that need arises”. The ownership of the venue, which received €31 million in State subvention, remains in private hands.

Although new Irish opera has been a growth area over the last 10 years, David Agler’s repertoire focus has yet to get around to Ireland. He has announced that Wexford is involved in the commissioning of a new opera from US composer William Bolcom for performance at the 2017 festival. Irish composers, eat your hearts out.

Minister Humphreys’s decision has opened Ireland up to the opprobrium of being a country which has a national opera house that is the only institution of its kind in the world to ignore not only the masterworks of the international repertoire, but also the output of native composers.

Martin Scorsese: ‘Crime is glamorous at first if you’re young and stupid’
9