From keyboard shortcuts to a mix of Latin and Sumerian: bands to talk about (or not) 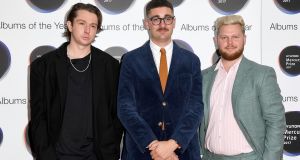 The Alt-J triangle, ∆, is the capital letter delta and can be typed on an Apple Mac with alt+J. Photograph: Getty

Of all the ways to name a band (lame puns, random nouns, Something Something and the Somethings), one of the most enduring is to choose something totally unpronounceable. Take ********, whose “first and final” album The Drink is out at the end of the month. They’re probably pronounced Guinness, given the self-penned guide to their name: “Generally Underwhelmed. Incognito. Niceties. Not Even Slightly Suggestive.”

Their aggressively out of tune jams, like Dean Blunt tinkering in a haunted bingo hall, aren’t likely to bother the mainstream so they might as well stop people even being able to talk about them. Or are they making their very unpronounceability a talking point? Well, whether obfuscation or marketing device, they’re far from the only ones to choose a name that requires a record company briefing before you can insert it into dinner party conversation.

When the enduring Brooklyn dance-punks emerged in around 2000, they said you could pronounce their triple-exclamation name with any trio of monosyllables, though “Chk Chk Chk” was the one that stuck.

This is the actual name for Alt-J; the triangle is what you get when you type alt-J on an Apple Mac keyboard.

“I accidentally put my finger down on the t on the keyboard while I was searching YouTube and this is what I find,” as one listener says. As marketing strategies go it’s perhaps not the most finessed, but let’s call this Montreal duo “t” for the sake of argument. Their echoing freak-folk tracks, such as woo-tooo-i-ooo-t’ooo, are essayed across five Bandcamp releases and nicely recall Animal Collective or Sunburned Hand of the Man.

The late-noughties “witch house” scene featured emaciated white people re-embracing heroin chic and making dystopian rap instrumentals, as an excuse for some silly band names. †‡†, also known as Ritualz, was up against the likes of ///▲▲▲\\\, oOoOO and M△S▴C△RA.

This Swedish duo make creepy ambient techno for listening to in the woods at night. Their pair of EPs last year, Rösten, were excellent and their most dancefloor-facing material yet. They get more unpronounceable points for their 2016 album SsSsSsSsSsSsSsSsSsSsSsSsSsSsSs.

Featuring bone-dissolving riffs where each note lasts about two minutes, these magnificent doom metallers have gone from dressing up as trees to collaborating with Scott Walker and achieving a kind of high-cultural cred. A party trick is to go to a Sunn O))) gig and start talking loudly about how much you like “Sunn Oh”. Within seconds you’ll have attracted a gaggle of people saying: “Actually, it’s pronounced Sun.”

A mysterious Newcastle trio whose name sounds like a Welshman trying to rid some persistent catarrh. They have one self-titled release with tracks full of dark ambient pulsations and non-specific menace, featuring names such as Deep Engulfing Ancient Evil Chambers.

This wonderful name starts off all fine and Latin and then strikes out into ancient unpronounceability using Ancient Egyptian, Akkadian and Sumerian lettering.