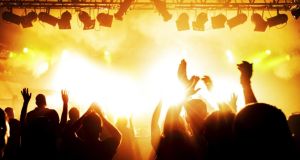 It’s time for Dan Croll’s fantasy festival. Where would you hold it? Somewhere with the natural landscape for it, maybe the Minack Theatre in Cornwall.

Who’d play it? People like Burt Bacharach, Paul Simon, Brian Wilson, James Taylor, Joni Mitchell, Elliot Smith, David Bowie, Prince, Bob Dylan. All masters of songwriting, just to show us all how it’s really done. Then I’d get them to play a song together and join my band afterwards.

What would the catering be like? Lots of vegetarian food. As long as there’s halloumi I’m happy.

What’s the most important thing you learned from your days at the Liverpool Institute for Performing Arts? As much as I learned from the course itself, I realised the most important part of my time there were the people around me. They were responsible for introducing me to a lot of great new music and genres that I had never heard before. Collaborating with these people was key as well.

You still based in Liverpool – what’s best about the city for you? I think it’s a size that’s perfect for me. It’s a pretty small city when you compare it to others. The people, Scouse humour and their personalities are so unique and I haven’t come across it anywhere else.”

You collaborated with Ladysmith Black Mambazo. What did it involve? It involved me going over to Durban in South Africa to record three tracks with them. Two of the tracks were my own, but very much influenced by Ladysmith, so I wanted to have them do their interpretation of the tracks. The third was one of theirs called Hello My Baby, but my own take on it, taking it from a capella to full band.

Who is on your list when it comes to future collaborators? Lots of current artists such as Little Dragon, Lykke Li, Bombay Bicycle Club, Tune-Yards and many others.

What festivals have you enjoyed in the past few years? The European festival scene is incredibly strong: you’re very well looked after and the festivals as a whole are really well thought out. American festivals have a great atmosphere and the English festivals have the history. Reading and Leeds was a big highlight for me.

It’s time for the Sleep Thieves’ fantasy festival. Where would you hold it? Lambay Island, have you seen it on Google maps? It’s amazing. Castles, forests and the sea.

Who’d play? Sigur Rós for that sunset moment, Fleetwood Mac (circa ’87) for the classics, Kate Bush for the dreamy midnight hour, Bat for Lashes for the magic, Rick James for the crazy factor and The National because they’re deadly.

Who’d look after the catering? Anthony Bourdain, although getting him to cook now might be a bit of crack. Also Michelle Roux and Adam Richman on quality control.

Any extra attractions? The waltzers, a T-Rex, glass bottom boat – you know, the usual.

What’s the ideal place or environment for people to hear your new album You Want the Night? Train journey across Siberia at night. Half starry night, half blizzard.

What are your views on acts playing festivals for free? Every band starting out has played something for free. There wouldn’t be a music festival without the music. Fair is fair, really. The assumption by fans is that every band are getting paid. The fan buys a ticket to hear the music. If there is profit made, then share the wealth around.

What festivals have you enjoyed in the past few years? Loved playing in the castle last year at Castlepalooza, really enjoyed Longitude last year and Electric Picnic on numerous occasions. Berlin Festival was pretty special. Would have loved to have been at ATP [All Tomorrow’s Parties] in Iceland.

You have your own festival Worldwide in the south of France.

What’s the best thing about the event for you? For me, it’s just a way of bringing all these different aspects of what I do musically into the same place and to really give the scene that I’m part of some focus. It’s great to be able to represent all the music I get to play on the radio. I can put on people like Ebo Taylor or Konono No 1 or Orchestre Poly-Rythmo next to straight jazz stuff next to electronic music and techno. Over a period of seven days, it clearly defines what I do for the rest of the year. It’s the best thing I’ve done for the last few years in my career, I must admit.

Was Worldwide influenced by any other festival? When I was younger, I used to go to the Montreaux Jazz Festival because my brother was at university there. I was always fascinated about how they used to always have acts who weren’t playing at any other European jazz or music festival. I always wondered how Claude Nobs, the guy who ran it, did that. I remember seeing Astro Piazolla the accordionist playing with Wayne Shorter there and it was amazing.

Who would be your ideal collaborators in that sense for Worldwide? If money was no object, I’d get Flying Lotus to do his new project with Herbie Hancock. I’d like to get Taylor McFerrin to work with his dad, Bobby. I’d like to get the Roots to come and do something with Erykah Badu. I’d get James Blake to perform with Mount Kimbie because I remember putting them on together as a unit at Ronnie Scott’s and I’d like to bring that back.

Who has impressed you most at Worldwide? James Blake. That was the pinnacle of what I’ve done so I want to make sure he comes back.

Do you like playing other festivals? I’m not a big festival guy. Festivals and me have a very odd relationship and that’s one of the reasons I did my own one. I was fed up of turning up at festivals where it was either too dance music-heavy and had no sense of the avant garde or it was too live band-heavy and the technicians had no idea how to deal with DJs. I wanted a festival where, regardless of whether you were a band or a DJ, you would get 100 per cent amazing treatment, from sound to backstage. The festivals I like the most are hugely influenced by the guy who runs the festival. For me, Rob da Bank does a great job of that with Bestival. He’ll always make the effort to say hello and drop by. There are so many festivals which are just soulless and brand-heavy.”

What questions do you ask your agent about a festival before you say yes? I usually have a sense of what to expect. I knew about Castlepalooza, for example. and a lot of people had told me it was really good and I haven’t played in Ireland for a while and that had something to do with it. If T In the Park or V called me up and asked me to play next to James Blake or whoever, I’m up for that. I won’t say no just because it’s a certain festival.

How hard is it for you to do your Saturday afternoon show on BBC 6 Music if Arsenal are losing? That’s a tough one. It depends on how important the game is, but I haven’t quite managed to work it out. It’s impossible for me to ignore it because I’m such an obsessive fan. I have to be philosophical about it and just put my head down and play the tunes.

What can we expect from your Brownswood label in the months ahead? We’re working on a new Mala record, which is a continuation of his Cuba thing but it’s not Cuba. There’s an EP with Swindle, which is really exciting, and I am about to go and make a record in Indonesia around the gamelan scene. We’re up to volume 11 in the Bubblers’ compilations, we’ve a Diggs Duke record coming out and there’s a new Zara McFarlane record in the works. It’s tough, it’s not an easy place to be putting records out, but I think we’ve put out some great records in the last couple of years.