Primavera picks of the festival field

Many festival thoroughbreds had their first run-out at Primavera last weekend, so who tops the form card? 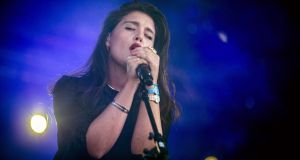 Jessie Ware gave rock royalty a run for its money at Primavera. 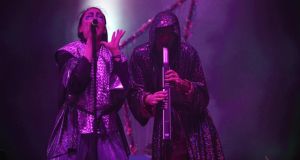 The Knife on stage at Primavera in Barcelona. Photograph: Burak Cingi/Redferns/Getty Images 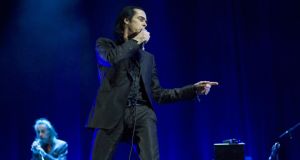 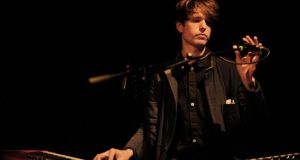 Kurt Vile & the Violators
With the full muscle of his band behind him, Kurt Vile is a force to be reckoned with. The sound might be sprawling, but it’s built on a rock-solid foundation of old-school blues chops and swagger. The ex-War on Drugs front man can slow the pace right down with a sudden solo number, creating a bit of dynamic and holding back plenty of firepower for the home straight.
Forecast: He’s wild in the pack, and might go quiet on the back straight, but expect a strong finish at this year’s Body and Soul festival in mid-June. 4/1

Matthew E White
From fine breeding stock in Richmond, Virginia, Matthew E White has shown plenty of promise, through his deeply accomplished debut album Big Inner, and a stunning display at Whelan’s earlier this year. At Primavera, he rose to the festival challenge without breaking a sweat, delivering an uplifting, soulful, assured set that never looked in any danger of stumbling. There’s nothing here to suggest his Electric Picnic form in late August/early September will be anything but, well, electric.
Forecast: A dead cert. 11/4

James Blake
He might be just 24, but James Blake has already proven his class, and all indications are that he’ll only improve further. He’s subtle, composed and assured, and is producing a type of electronica that sounds like an evolution in British music. Blake is running in a class of his own, and most of the rest of the pack are struggling to keep up.
Forecast: He might be down the card from the likes of Kasabian, but he’s the safe money at this weekend’s Forbidden Fruit festival. 9/2

Blur
A cracking band who’ve picked up all the trophies there are on the music circuit, Blur are experienced, assured festival hands. It might be predictable, but when they’re in full, flying form, expect the nostalgia to kick in and carry any crowd safely over the finishing line at the Irish Museum of Modern Art in Kilmainham, Dublin in August. They got out of the gates slowly at Primavera, but once they settled into the set, they took control, rolled out the hits and finished in style.
Forecast: As safe a bet as a festival can offer, assuming you’re in to win in the first place. 2/1

The Knife
The sheer unpredictably of The Knife makes them too tempting to ignore for many punters, even those unfamiliar with their previous form. In Primavera they delivered an explosive, tribal set, filling the stage with bewildering instruments and dancers, and created something of a musical epic. They might have been out of the limelight for some time, but don’t expect that to mean a sluggish performance on the day. Moving from the all-weather surface of Primavera to the soft going of Electric Picnic should work in their favour.
Forecast: Unpredictable, but unbeatable at the top of their form. And who could resist a punt on an outsider? 3/1

Jessie Ware
A relative newcomer on the festival track, Jessie Ware showed fine form as a late entry on SBTRKT’s album, and bolstered her credentials further with a strong debut record of her own. At Primavera, she showed that her abilities aren’t limited to the studio, and produced a fantastic, professional run, with plenty of poise and control. Ware seems like a force to be reckoned with at this year’s Longitude festival in mid-July and for many more seasons to come.
Forecast: A continuation of her current form will make her hard to beat. 3/1

Phoenix
This French outfit are rock royalty, yet it’s been quite some time since they’ve graced an Irish field. They’re custom-built for these conditions, thanks to catchy pop tracks that could move feet made of clay, and anthemic choruses that demand to be sung. Their most recent record may have disappointed quite a few punters, and perhaps their Primavera show lacked a few fireworks, but expect them to close the Longitude festival comfortably enough, roared on by the crowd.
Forecast: Firm rock favourites with a touch of French class. 2/1

Nick Cave
Nick Cave rarely disappoints, and with his full Bad Seeds posse rolling into town, few would dare bet against him. At Primavera he was in formidable form, showing intent and menace from the outset, and drawing on his vast back catalogue to build a set of sound and fury. This was relentless stuff, with Cave and the Bad Seeds letting it all off the rein and leaving most of the rest of the field for dust at Body and Soul.
Forecast: A wild ride, certainly, but with experience in spades and power on tap when it matters most. 2/1

Savages
These dark horses come from England, with French singer Jehnny Beth leading the charge. At Primavera they showed flying form, and a few midsong problems with a faulty guitar weren’t enough to throw them off their pace. They’ve got a self-confidence that’s a joy to watch, and an intensity that’ll put most other acts their age in the shade.
Forecast: Well worth seeking out further down the Longitude card 4/1

Solange
There’s no doubt that Solange Knowles comes from a stable with a world-class reputation, but she’s a different prospect than her sister. Solange’s edges are all smooth, and at Primavera, she showed class and composure, if a little too much predictability. She’s got ability, but might not go the distance.
Forecast: Might struggle to stand out from the tough field of this year’s Body and Soul line-up, but worth a punt if you’re familiar with her form. 6/1
My Bloody Valentine
A rare Irish raiding party at this year’s Primavera, MBV went toe to toe with plenty of the other experienced runners at the Spanish festival. Many were taken by surprise when the band came suddenly out of retirement, but with Kevin Shiels looking as in control in the saddle as ever, expect a strong, blisteringly loud run-out at this year’s Electric Picnic. They’ve been a favourite with punters before, and they don’t seem to have changed their approach one iota.
Forecast: If it ain’t broke, don’t fix it. 5/1

Wu-Tang Clan
Expect strength in numbers from one of the best hip hop crews around when the Wu-Tang Clan roll into the Electric Picnic. They are one of the rare acts of their kind crossing the water to compete at an Irish festival, but don’t confuse experience for tiredness – at Primavera they showed they still roll with the best of them.
Forecast: Former champions, who’ve got plenty in the tank. 3/1

Local Natives
One of the hotly tipped acts away from the main stages at Primavera, Local Natives showed strength and class throughout with a fine performance. The band work off solid fundamentals – good musicianship, fine songwriting, strong individual performances with plenty of energy – and, having sought some help from The National’s Aaron Dessner for their last album, they look set to build on their impressive form to date.
Forecast: Ticked all the right boxes at Primavera, and should show their class at Longitude. 4/1

Blindboy: ‘Being recognisable is absolute hell’