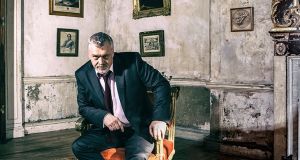 David Kempster in Mozart’s ‘Don Giovanni’: a new translation by Roddy Doyle will be staged at the Dublin Theatre Festival

If only common sense were not so rare. Just look at the Arts Council and the mess it has been in for years with its Festivals and Events Scheme. This scheme offers grants of up to €20,000 and supports a truly diverse selection of musical endeavours.

There are the New Ross Piano Festival, the Sligo Festival of Baroque Music (both at the end of the month) and the East Cork Early Music Festival (next month) as well as the Galway Early Music Festival. The chamber music festivals in Westport and Monkstown (both starting this Friday) are funded by it, as are the one in Killaloe and the concerts of the Irish Composers’ Collective and the annual organ recitals at St Michael’s Church in Dún Laoghaire.

What all these ventures have in common, apart from success in the same Arts Council scheme, is the fact that they are all annual series or events. And yet the scheme’s terms and conditions are explicit about providing funding on “a non-recurring basis”. The funding that’s offered is “on a once-off basis and independently of the outcome of past applications”.

That seemed like a good development for an organisation which engages in a form of newspeak which allows the concepts of “festival” and “non-recurring” to be written into terms and conditions without apparent contradiction.

So what has happened since? Well, in terms of actions leading to real-life outcomes, absolutely nothing. The council is working on a solution. It has not removed the crazy stipulation that the funding of long-standing events should be on a non-recurring basis. It has not addressed the limitation that prohibits first-time applicants from seeking more than €10,000, and it has left in place the restrictions that make it well-nigh impossible to breach the barrier between Strand 1 events (receiving up to €10,000) and Strand 2 events (receiving between €10,001-€20,000).

It seems that the council is more concerned to preserve the illusion of coherence, rather than making an immediate intervention and removing the current idiocies as an interim measure.

The council’s ideologically-driven, bureaucratic thinking is also doing continuing damage to opera. The dire treatment of opera by the council, particularly over the past 10 years, has been well aired in these pages. There was its failure to implement the policy it adopted in 2006; the ludicrous notion of making Wexford the headquarters of opera in Ireland (the so-called Shannon Plan); the failure to follow its own advice about maintaining the level of opera funding during the interregnum created by former minister for the arts Martin Cullen’s doomed plans for a new national opera company; and the demise of Opera Ireland in the absence of a coherent vision of what might take its place.

Paradoxically, the stop-gap measures adopted by the council since the closure of Opera Ireland have shown an unexpected vitality in the sector, driven mostly by new companies: Fergus Sheil’s Wide Open Opera, Oliver Mears’s NI Opera (which gets Dublin funding for activities south of the Border), Colette McGahon’s poorly named Irish Youth Opera (the company actually works with young professionals), and the boundary-stretching work in Cork by John O’Brien (whose own opera, The Nightingale and the Rose, gets a first performance in concert at the Everyman Palace Theatre next Sunday).

What’s missing, of course, is a replacement for the kind of service that Opera Ireland provided in core repertoire. As things stand there is no regular or predictable provision of full-scale performances of the operas that the public wants to hear most.

The stop-gap solution has had two strands. The first has been to fund two well-established enterprises, Opera Theatre Company (whose Gavin Quinn production of Mozart’s Don Giovanni in a new translation by Roddy Doyle opens at the Dublin Theatre Festival on September 29th) and Wexford Festival Opera (which has only a handful of unsold seats for next month’s performances).

The second has been to create competitive schemes for large-scale productions and smaller projects. The smaller scheme is focused on new work by Irish composers and its funds can be used to cover development, composition and performance.

But the council has ambitions to reform the way it approaches opera, and these are driven by Making Great Art Work, its three-year plan for 2017-2019, a document of such pure jargon that words such as opera, music, theatre, writer and composer don’t appear at all, but practice and engagement are all over the place.

So what did the council do? Well, again without consultation, it spent a full year’s money on the applications for the first eight months. Such is the lack of accountability in Merrion Square. This is not a matter of cutbacks or financial constraint. It’s a matter of unrestrained arbitrariness. They do it because they can get away with it. The question is: how can they be made to stop?