After 20 years working on vintage synths from his shed in Dublin 8, John Henson is busier than ever 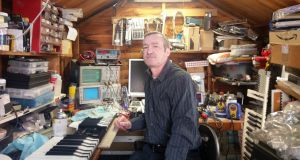 In the back garden of a small terraced house in Dublin’s Coombe, John Henson has spent most of the past 20 years in his shed, fixing analogue synthesisers in need of a repair, so they can make noise again.

Ask any self-confessed synth-head in Ireland about their instrument of choice and Henson’s name will come up. Recommendations arrive by word of mouth, and faulty synthesisers (and drum machines and sequencers) make their way to John’s shed at a rate of sometimes two or three a day. At any one time, there are usually 20 synths in the house waiting for spare parts to be repaired before they are returned to their owner.

The most common cause of an inactive synth? At his workstation in his cramped shed, Henson points to the synth he’s currently repairing. The keys don’t work and it’s down to a sticky brown substance.

“That is definitely Guinness. The odd time it is tea, sometimes it is black coffee but usually it’s Guinness that is cause.”

Henson left Ballinasloe aged 22 and began his career working with electronics. He taught himself his craft from years of buying electronics magazines (which he still has 20 years worth of in the shed). He worked at CCT in Dublin, a PA and installations company, fixing mixing desks, guitar amps and effects units: “Whatever they threw at me – which was a lot.”

First synth repair
He repaired his first synth in 1984 or 1985, a Prophet 5 that belonged to Liam Reilly of Bagatelle.

“Back in those days, you had to work blind. There was no documentation, no internet, no schematics. It was a bit of an over-nighter to get that one going, as they needed it in a hurry. I did crack it. I seem to remember it was a fairly bog-standard type of chip in it that had failed. The same type was used in mixing desks and I had one and it fit straight in.”

The 1980s were a golden age for the synthesizer, both in terms of equipment and the music made. Henson loved prog-rock and electronic pop: “Your Depeches, Spandaus, Human League, Thompson Twins – the list is endless.”

After a period of working with computers in the 1990s, Henson returned to synths.

“Everything was getting so cheap, in relative terms, that it was easier to throw a computer out and buy a new one than actually paying anyone to do any work on it.”

One man, one shed, many parts
His tiny shed houses equipment for testing, a computer with 32GB of schematics and files relating to synths that he’s been collecting since 1998. The computer has card readers and a working floppy disk drive as many of the older model synths require it. Henson estimates there are up to 15,000 spare parts in his shed, and he shows me one box filled with expensive computer chips worth about €2,000 ready to be slotted into the next synth that needs it. The catalogue of small parts is “all in my head”, says Henson with a grin. “It’s probably one of the hardest parts of the job.”

He sources much of his parts in RS, an electronic an electrical components company based up the road in Rialto. He recommends them highly but says he often has to source parts online too or via a synth repair Facebook group he’s a member of.

The appeal of analogue
The vintage synths popularised in the 1980s are more popular than ever despite the short supply. They are bought and sold on sites like eBay and highly sought after. It’s a trend that not even Henson saw coming. “I could have picked up 30 or 40 grand worth of synths for probably less than a thousand at one time,” he says.

He understands the appeal of vintage analogue synth over the modern digital ones. “A lot of it is quite romantic. A musician doesn’t want inconvenience, they want the sound, that’s their prerogative. In general, the build quality is better. There’s a lot less plastic in them, they’re heavier but they’re also more expensive.”

Henson has some favourites of his own but he doesn’t really play. “I’m no Rick Wakeman. It helps to be able to play a bit. Keyboard problems are a regular feature so I have to do a lot of testing.”

He owns 10 synths including a Memorymoog and a Prophet T8, but both are in storage. He is a big admirer of the Roland Jupiter 8 and says there are more in Ireland than people think.

“Everyone thinks they’ve got the only one,” he smiles. “I’ve repaired 14 so far and number 15 is coming from Mayo this week.”