Loah: medicine for body and soul

A trip to New York forced Loah to take her music seriously, and now the part-time pharmacist, who has worked with Hozier and Kíla, is about to strike out on her own 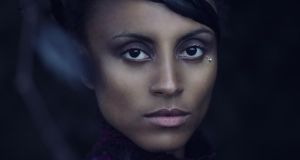 Loah: ‘You have to nourish yourself with anything that inspires you because that’s where your creativity comes from.’ Photograph: Eve North

Sallay Matu Garnett lives in two different worlds. The Dublin-based soul singer’s artistic flair is evident in her striking look and vibrant clothing. But for many people, Garnett, or Loah as she is known on stage, is their local pharmacist in south Dublin.

This Irish/Sierra Leonean singer, who rose through the Irish gig scene with a blend of funk, jazz and folk, says her fascination with healing has led to her dual worlds of medicine and music.

“As a teenager, I was obsessed with the idea of the healing arts in a big way,” says Loah, who was born in Kenya and grew up between Maynooth, Gambia and Sierra Leone. “I threw myself into my studies so I could do health sciences.”

The skills she learned playing violin stood to her through years of intensive study. “It’s an extremely difficult instrument. You achieve this diligence and, before you know it, you’ve developed qualities like persistence, discipline and a really good ear for tuning.”

Loah also learned to play the piano, using the instrument to explore the passions of a teenage girl living between Ireland and Africa.

“The piano has remained the instrument I keep quite private. I don’t perform on it but I use it for writing songs. I refuse to do any grades. I never want to be examined. I just want it to remain this space that is completely expressive for me.”

It wasn’t until she went to university, where she studied pharmacy, that Loah developed her singing voice. Despite the fact that her parents had “gently dissuaded” her from a career in music, she dived straight into the Trinity College jazz scene.

“I did gigs the whole way through college, sometimes taking away a bit from my degree, but also supporting it through the positive state of my mental health from gigging.

“The people I gravitated towards were the people intending on having music as a career. They were able to take it seriously in a way I never had. It took me a good while to make that paradigm shift between music as a hobby to music as life’s work.”

After college, Loah began to struggle under the increasing demands of her pharmacy training and she abandoned music to concentrate on work.

“I was accepted in the same week to Anúna and Discovery Gospel Choir, and I realised with my job and master’s that I was not going to be able to pursue any of them. That was one of the toughest years of my life; as humans we’re really meant to express ourselves.”

Realising she had made the wrong decision, Loah headed for her “artistic Mecca”: New York. “I ended up staying in an artists’ loft in the hipster dream of Williamsburg, where I met an incredible group of painters, photographers, and musicians. The anonymity of New York was great. I could just observe. It was like the art college experience that I never had.

“I didn’t want to perform; I just wanted to learn, and I spent a lot of time listening to spoken-word poetry.”

Loah was impressed by the American way of recognising personal achievements. “We have this lovely cultural modesty about ourselves in Ireland, but it can go a little far sometimes into self- deprecation. You’re not even allowed to say that you worked hard. I definitely struggle with self-deprecation, and it’s not healthy.

“In New York everyone was saying I’m an amazing artist. I’d never heard that level of hyperbole with people speaking about their art.

“You have to nourish yourself with anything that inspires you because that’s where your creativity comes from. That’s what New York taught me.”

On her return to Ireland, Loah began to draw on her African roots to create what she calls her her “artsoul” sound. She used her travel experience and language skills in French, Spanish and Krio – an English-based creole language of Sierra Leone – to tell her musical story.

One of her main inspirations is Mali’s Omou Sangaré, who often sings of Malians who have travelled abroad and calls for them to bring the skills they’ve learned back home.

“It’s such a lovely sentiment, especially because we’re Irish and so familiar with emigration. As Zadie Smith says, the best hope you have of telling a good story is talking about the place you’re from.”

Loah’s latest song, Cortege, draws on the roots of her ancestors, telling a story of maternal love – “that amazing feminine strength that sustains the whole family” – through Sherbro, the ancient language of her grandfather’s tribe in Sierra Leone.

The company she keeps

Collaborations with other musicians have also played a role in Loah’s musical progress. Her solo voice features on Kíla’s album Soisín and the upcoming album from Discovery Gospel Choir. She also wrote a song with Hozier for his debut album.

“I co-wrote a song with Hozier called Someone New, which has a much more poppy sound,” she says. “With Kíla I was asked to improvise, whereas with this it was like: here’s a chorus, here’s a hook. With Hozier, stuff is much more [about] the traditional structure of a song.”

Loah has watched the rapid spread of Ebola in Sierra Leone. Her father, an environmentalist based in the capital, Freetown, has decided to leave the country temporarily, although most of his family will remain behind.

“I was there myself in April and it was a sort of a whisper. Nobody was really worried about it. Then we started hearing about cases, and I was overwhelmed with terror because this is my home.

“Sierra Leone has made so much development in recent years. The infrastructure was getting on its feet, but it certainly wasn’t ready for this onslaught.”

Loah now works part-time as a pharmacist and spends the rest of it collaborating with Ensemble Music, a Dublin-based management company that has helped her to make the shift from music as a hobby to a career, but she’s aware that sooner rather than later she’ll have to decide between music and medicine.

“My dad describes it as I’ve got my foot in two boats, and the boats are sailing away from each other. I’m really enjoying this interim: it feeds every part of my personality and my brain right now. But I’m probably going to jump ship into music when the time is right.”