From the archive: Of all the singer-songwriters of his era labelled as poets, Cohen was perhaps the one who truly bridged the divide

‘Now, you know of my deep association and confraternity with the poet Federico Garcia Lorca. I could say that when I was a young man, an adolescent, and I hungered for a voice, I studied the English poets and I knew their work well, and I copied their styles, but I could not find a voice.

“It was only when I read, even in translation, the works of Lorca that I understood that there was a voice. It is not that I copied his voice; I would not dare. But he gave me permission to find a voice, to locate a voice, that is to locate a self, a self that is not fixed, a self that struggles for its own existence.

“As I grew older, I understood that instructions came with this voice. What were these instructions? The instructions were never to lament casually. And if one is to express the great inevitable defeat that awaits us all, it must be done within the strict confines of dignity and beauty.”

That quote from a speech made by Leonard Cohen when he received the Prince of Asturias literature prize in Spain in 2011 is a measure of the singer’s fastidious and thoughtful approach to art and life.

The Spanish award was not the first in recognition of his gifts as a poet; he has received others, and was awarded a Canadian Governor General’s Award for his Selected Poems 1956-68 in 1968.

The words of Going Home, the opening track on his 2012 Old Ideas, are located in the poetry section of the New Yorker website. Perhaps it was no coincidence that Cohen’s appearances in Ireland in 2010 placed him on ground that resonates with Yeatsian associations; the concert took place under Ben Bulben and in the shadow of “that old Georgian mansion”, as Yeats referred to Lissadell.

It might well have pleased him that Time magazine once described his voice as “like Villon with frostbite”, François Villon being one of the greatest French poet-troubadours. The American Academy of Poets commented that “While it may seem to some that Leonard Cohen departed from the literary in pursuit of the musical, his fans continue to embrace him as a Renaissance man who straddles the elusive artistic borderlines.”

Similarly, the Everyman’s Library Pocket Poets edition of his work, putting Cohen in the company of an illustrious list of poet-superstars, makes no distinction between lyrics and poems, and in his introduction to that volume, critic Robert Faggen suggests the singer has eroded the “artificial boundary between poetry and song”.

The late blooms of Cohen’s recent artistic resurgence show definitively that the songs are not auxiliary to his published poems. Of all the singer-songwriters of his era who have also been labelled as poets, Cohen is perhaps the one most at ease with metre and rhyme, having already established his artistic persona and been lauded for the verses he published before emerging as a singer, though not one, as he said in Tower of Song, “born with the gift of a golden voice”.

As well as poetry, he had published two works of fiction: Beautiful Losers, a novel about a poet; and The Favourite Game. Their impressionistic style was perhaps influenced by his reading of Joyce’s Portrait of the Artist as a Young Man, which was on Cohen’s syllabus at McGill University in Montreal. 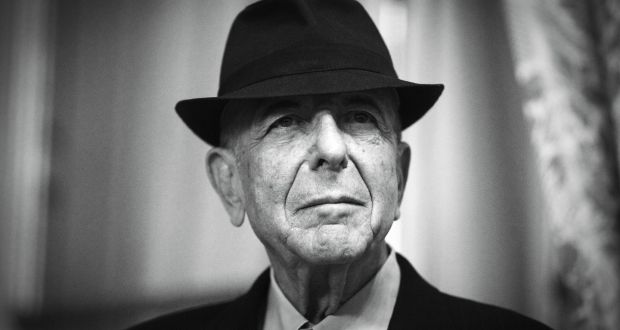 The richness of his language of images, its tone and cadence, revealed an artist whose way with words set him apart. His literary skills were brought to bear on his song lyrics; a gift for the highly visualised, a playfulness with refrains and repetitions.

Robert Bly once said of the Swedish poet and Nobel Laureate Tomas Tranströmer, he has a “strange genius for the image”. So too Cohen, especially his use of images in those songs that introduced Cohen to an audience beyond the world of poetry, as in Suzanne: “There are heroes in the seaweed/ There are children in the morning/ They are leaning out for love/ They will lean that way forever.”

He is profoundly conscious of the cultural and religious inheritance that has been passed on to him as a Jew, and he knows too the value of the Zen moment. Never one for songs of innocence, he is always ardent in his songs of experience.

Cohen’s use of the word “lament” in his Asturias speech is crucial. Lament has been a constant and conspicuous characteristic of his work, lament for Joan of Arc, the Sisters of Mercy, the Nightingale, the Famous Blue Raincoat and the Heart with No Companion.

It was Lorca, another poet of desire and troubled imagination, who led him “into the racket of poetry” and who has been a seminal influence. Cohen’s version of Take This Waltz transmutes the Spanish poet’s melancholy into a Cohenesque melody of longing.

Lorca is again a source of inspiration for Cohen’s admirable version of The Faithless Wife: “Her petticoat was starched and loud/ And crushed between our legs/ It thundered like a living cloud/ Beset by razor blades.”

Other poets have featured in his work, signifying a fellowship that has sustained him: he adapted The God Abandons Antony by the Greek poet CP Cavafy as the wistful Alexandra Leaving, a keynote inclusion on the album Ten New Songs.

The follow-up album, Dear Heather, opens with a suitably mournful rendition of Byron’s So We’ll Go No More a-Roving; it’s a foretaste of the autumnal mellowness that haunts Old Ideas, which was released at the beginning of 2012.

There is both wit (“and other forms of boredom/ advertised as poetry”) and learning in Cohen’s writing and, almost always, that melding of the sacred and profane. His poems have stories to tell, his narrator’s voice being one that seemed world-weary even when he was a younger man. His darker moods suggest a writer with the sensibility of the poète maudit.

But perhaps Simon Schama is closer to the mark when he describes the songs of this “grocer of despair” as embodying a “mutilated romanticism”.

On the 1992 album The Future, Cohen hit a higher pitch, and lyrically a new stride, with song-poems that looked to world order and issues of justice: Democracy, Anthem and the title track. Their unsettling focus on moral and social decay, as well as the paranoia of the modern world, brought Cohen into the realm of public statement.

Although, unlike many of his contemporaries, he was never a protest singer. He had previously recorded songs that reflected his concerns: The Old Revolution and, particularly, The Partisan, which is not a Cohen lyric but a French Resistance song that he frequently features in his shows: “Oh, the wind, the wind is blowing, through the graves the wind is blowing, freedom soon will come; then we’ll come from the shadows.”

He knows that “things fall apart; the centre cannot hold”, and, like Yeats, he has his own tower but it’s a Tower of Song, from which he has seen “the nations rise and fall” and that “the rich have got their channels in the bedrooms of the poor/ And there’s a mighty judgment coming”.

Lorca once described himself as “a poet from birth, an incurable one”. Cohen could say the same about himself.

On the other hand, perhaps he should remember that story about Thomas Moore and Byron on the banks of the Thames. As a barge-man goes by singing a Moore melody, the English poet, turning to the Irish bard, declares: “That’s immortality, Tom, that’s real immortality.”

This article was originally published on August 18th, 2012