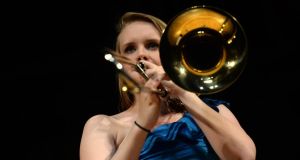 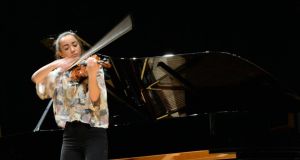 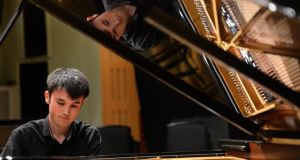 A selection of Ireland’s most talented young classical musicians gathered at the National Concert Hall in Dublin last night to take part in the 2014 ESB Feis Ceoil Gala Concert.

From performances of James Horner’s Titanic to Rachmaninov and Bernstein, choirs, orchestras and musicians from around Ireland took to the stage to present their highly skilled musical expertise.

Dylan Browne, from Waterford, dazzled audience members with his recital of Ginastera’s piano sonata in the first half of the concert.

Until recently, the 17-year-old had always imagined he would pursue a career as a lawyer, but when he began classes at the Royal Irish Academy of Music he knew he had found his life’s passion.

“It was a massive transition and completely changed my life,” he said.

“It’s opened up a new artistic world and transformed me into a completely different person.”

Mr Browne said he went into complete shock when he learned he had won first place in the Dorothy Stokes cup for junior piano at the Feis Ceoil.

Clara Daly Donnellan (18), from Cork had a similar reaction when she discovered in the space of three weeks that she’d won first place in the Feis Ceoil Yamaha brass bursary, been accepted to study music in Bern, Switzerland, and also received an award of €10,000 for the RDS music bursary.

Having received the news of the highly sought after RDS bursary the night before the concert, Ms Donnellan was still feeling overwhelmed by all the good news.

She is the youngest musician to ever win the bursary.

“This award makes such a difference in the life of a young musician,” she said. “It’s amazing to get that financial support and confidence boost.”

Ms Donnellan played trombone for the Feis Ceoil, an instrument often associated with a group of men hanging around the back of an orchestra.

“It’s not very often you hear a solo trombone in the National Concert Hall,” she said.

“As a female brass musician, it’s an amazing opportunity to show how expressively this instrument can be played.”

Up to 5,000 young musicians competed in 186 competitions in this year’s Feis Ceoil, including the inaugural orchestral conducting competition.

Feis Ceoil chief executive Laura Gilsenan, who presented last night’s concert, said it never failed to surprise her how the standard of musicians goes up every year.

“These young musicians are so poised and able to handle the pressures of the competition,” she said.

“All the prize winners here tonight, without exception, will be able to make successful careers as musicians.”