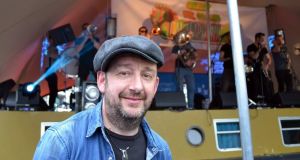 Dave Judge: “People know where I’m coming from, there’s no agenda with me – I do it because I love it”

Dave Judge has been hosting live music events with an increasing frequency in the past few years. But most of those gigs don’t take place in traditional venues. They happen at his barbershop – Abner Browns’ on Rathgar Road in Rathmines, which he has been operating for more than 17 years.

A parallel career as a promoter began after Judge, who lost money in the crash that he had invested in property, came back to working in the shop full-time. A picture of a refurbished shop Judge sent to his wife showing some album cover frames, a cheap €30 couch from Oxfam and a guitar on the wall gave him an idea.

That Saturday, Judge asked the visiting Canadian singer-songwriter Blair Packham to come down and sing a few tunes while the shop was at its busiest. Another guy, in a rockabilly band, who was in getting a cut asked if he could do the same thing. Then another. And another. Abner’s instore gigs became a thing.

Accidental promoter
“All of a sudden, we had too many people and we couldn’t cut hair – and that’s what puts food on the table,” says Judge. They started putting on gigs when the shop was closed in the evening, starting with Donna Dunne on a Friday night.

“We didn’t know what we were doing, or how to set it up. We’d no PA or nothing. Again, the same thing happened, someone was there from The Viking Project, Mick, and he asked could he do it the next week. It went from there, Musicmaker lent me a PA, we have lights and a sound engineer now.”

From those accidental beginnings, Abner Browns’ has gone on to host Irish musicians including The Hot Sprockets, Duke Special, Mongoose, Bell X1’s Dave Geraghty, Gavin Glass, Sive and Molly Sterling and most recently Ash, who asked to play on a day off last month.

Even former REM singer Michael Stipe is a fan. He called into the shop in early 2015 after his godson, who lives around the corner, told him about the curious musical goings on in the barbershop.

“This fellah said to me in the shop one day – ‘there’s a guy I know who loves what you do - he’s in the music business in the States. I must bring him in’. ‘Yeah of course,’ I say not believing a word. But sure enough, in he walks a few months later. which was great publicity for the shop.

An analytical brain
As word spread, so too did the remit of the live music, which went on to host gigs in The Sugar Club and charity events for Oxjam at Electric Picnic for the past three years.

Judge began helping singer-songwriter Sinead White as a manager. While he has taken a break from management, he says his business background is well-suited to managing artists.

“I come at things from a different perspective than a lot of music heads. I do marketing. I know about PR. I’d talk about products, promotions and placements. I think if a lot of musicians took on a manager that had a business background, things would go a lot better for them. They would know how to market themselves a bit better. They’d understand how better to put themselves across to festivals and the like. The analytical brain is different to the artist brain.”

Canalaphonic
Judge was asked by Dublin City Council if he was interested in putting on a small free event in Rathmines and Portobello to coincide with a boat rally on the canal. Canalaphonic Music Festival was born.

“They just had an idea to put on a stage somewhere with a couple of bands and they’d pay for it. It was a really small budget. The pubs all thought it was a great idea. I kept going to DCC and saying we could make it a bit bigger, and then a bit bigger.”

Judge and DCC expected 800 people to turn up over the May weekend – 4,000 people came out in the end to see acts like Gavin Glass, New Secret Weapon, Elephant, Sinead White, Stomptown Brass and The Hot Sprockets.

“It turned out to be the biggest free music event in Dublin last year. We booked 20-30 acts, 20-odd venues including coffee shops, art spaces, restaurants.”

Local business were delighted with the activity and it helped when plans for this year’s event were put in motion.

“One of the pubs had the busiest day in 10 years, one of the restaurants had one of their busiest days ever, shops were selling-out. People were spending in the area and that was the idea to bring people to Rathmines and Portobello.”

Last year’s event was such a success, Canalaphonic would have to move its main focus from the canal itself to a new venue.

“We’d need road closures, a huge garda presence which would cost a lot of money,’ says Judge. “So I happened to be in the local coffee shop in Rathmines and I was talking about the Leinster cricket club as a great venue. The guy behind the counter, Kevin said ‘my brother-in-law is the secretary, I’ll give him a call now’. Just like that, it was on. I was lucky, Happenings had just had a open-air cinema there with 1,000 people and a resident said to them, ‘my god, the next thing will be rock concerts’, and there ya go. It’s happening.”

Move to September
The festival was moved to September to facilitate the end of the cricket season. The club grounds will have a capacity of 5,000 people. Extra attractions and programming for 2016 include a family-friendly area, spoken word, theatre and poetry. The music will incorporate Whelan’s on Camden St. Acts lined up to play include Maud in Cahoots, Barq, Sample Answer, The Eskies, Rocstrong, Zaska and Áine Cahill.

Despite less funding available from the outset, the festival has seen support from the Arts Department, DCC Events, Fáilte Ireland, IMRO and sponsors in the form of local developers in the area.

As it’s a free festival, bands will be paid in expenses around €100/€150 with the bigger main acts getting a bit more, which is less than they’d normally get.

“People know where I’m coming from, there’s no agenda with me – I do it because I love it. There’s no money being made, everything’s just being covered.”

Regardless, Judge says he could see Canalaphonic growing across the city, from canal to canal: “Northside to Southside with events in the middle.”

Abner and Canalaphonic have undoubtedly given a new lease of life to Rathmines as an entertainment district. This month, Salty Dog, which hosts a stage at Electric Picnic, will open a venue in the area with a design based on a pirate ship.

“It looks fantastic,” says Judge. “It’s going to be a proper venue. I genuinely think I helped kick off the Rathmines buzz again.”