Here comes the sun for this year’s Forbidden Fruit festival 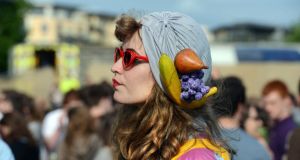 Preparations are well underway for this weekend’s Bulmers Forbidden Fruit music festival which takes place at the Irish Museum of Modern Art (IMMA) this Saturday and Sunday, May 31st and June 1st.

With forecasts for temperatures reaching 22 degrees on Saturday, festival goers should stock up on sunscreen and grab the final tickets for the June bank holiday festival which takes place on the grounds of IMMA/Royal Hospital Kilmainham, Dublin

Walking around the festival grounds overlooking Phoenix Park and the Wellington monument, it is easy to understand the attraction of spending a sunny summer weekend at IMMA with the more than 50 acts performing as part of this year’s festival.

The Flaming Lips will headline on Saturday with 2 Many DJs closing the festival on Sunday night. Other acts over the weekend include BellX1, Flying Lotus, Warpaint, Girls Names and Little Dragon. The festival set-up also includes the Comedy tent which, after last year’s success, has been relocated to the very centre of the festival grounds.

This year also introduces Forbidden Fruit and the City which gives people around central Dublin the chance to enjoy a two-day free music trail in addition to the festival at IMMA. Some 20 acts selected from last year’s hard Working Class Heroes music festival will perform in bookshops, restaurants, cafes and pubs around the city, with a line-up including Elastic Sheep, Jethro Pickett, Kobina and the Crayon Set.

“It’s a great add-on to the festival and extends the experience into the city,” said Ross Bissett, Forbidden Fruit on-trade Director. “Each venue will announce tickets on Facebook and there will be buses back and forth between the city and IMMA.”

The complimentary double decker festival bus will pick up at Harcourt Street between 1pm-7pm on both festival days, returning to the city each night.

Festival organisers are also excited to introduce the new Bulmers Good Time Lounge to those who make it out to IMMA. This new “chill-out” area is dedicated to art installations and live-music and will give festival goers the chance to gather together and enjoy the festival atmosphere in a more relaxed space. There will also be specially designated photo area for music lovers to capture the memories of what one hopes will be a perfectly blue-skied summer weekend.