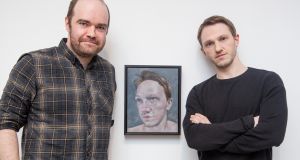 Gerry Davis, a graduate of the Limerick School of Art and Design, has won this year’s Hennessy Portrait Prize which is worth €15,000 and comes with a €5,000 commission.

Perhaps reflecting diverse views among the four-person judging panel, for the first time two other artists from the 14-person shortlist were highly commended. They were Gavan McCullough, for his highly exact large portrait head Imran, and Leanne Mullen, for her empathic, close-up study of a woman’s head, Someone’s Mother. McCullough was shortlisted for the prize in 2014.

Among the other shortlisted works were former Aer Lingus pilot Fergus A Ryan’s meticulously realist portrait Harold in egg tempera; Kim Haughton’s fine photographic study of Gabriel Byrne in his New York apartment when he was acting in Long Day’s Journey into Night on Broadway and, another photograph, Czech-born Vera Ryklova’s staged self-portrait from her series Aesthetic Distance.

Oil paintings in varying styles from Peter Bradley, Catherine Creany, Stephen Johnston, John Lee (Laoi) and Tom McLean were all shortlisted as was a pencil drawing by Regina Carbayo. Less conventional works that made the shortlist were by Angus Massey, who projected a video image onto a terracotta bust, and a digital drawing made on a tablet by Paul James Kearney.

Launched in 2014 and jointly organised by the National Gallery and Moët Hennessy, the prize aims to showcase contemporary portraiture. Nick Miller won the inaugural award and last year it went to Vera Klute. Although open to artists working in all media, for the third year running the prize has gone to a painter.

Since graduating in 2009, Davis has exhibited widely. He recently had a solo show at Pallas Projects in Dublin.

As part of the prize, he will be commissioned to paint a portrait that will become part of the National Gallery of Ireland collection.