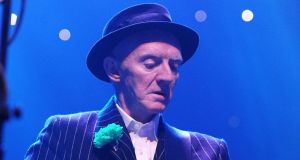 Phil Chevron’s funeral procession left the Mansion House to the sound of his own version of Thousands Are Sailing, which became a Pogues classic and is recognised as one of the finest songs about Irish emigration. Photograph: Mike Coppola/Getty Images 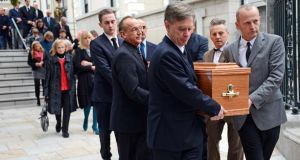 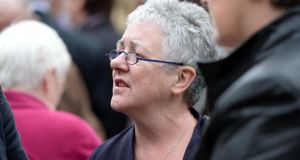 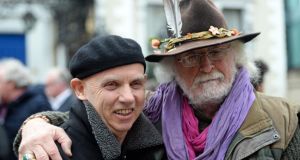 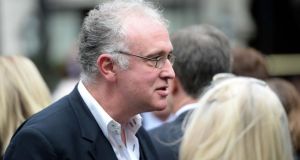 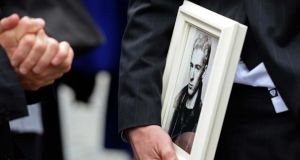 Pogues and Radiators from Space star Phil Chevron’s funeral service - or his “grand finale” as his sister called it - was bookended today by his two best known songs.

Before he died, Chevron, whose real name was Philip Ryan, requested a secular funeral and was granted his request - with several hundred of his friends and family turning up to the round room in the Mansion House this morning.

The theme may have been secular, but it was The Song of the Faithful Departed, a song steeped in Catholic imagery from his Radiators from Space days, which accompanied his coffin being brought into the room.

Those who turned up reflected his wide range of artistic interests. From the world of music, three of the former Pogues were there: multi-instrumentalist Jem Finer, drummer Andrew Ranken and bass player Darryl Hunt.

Shane MacGowan was absent, but had been present at the Olympia Theatre for Chevron’s benefit concert in August.

Others present included his former bandmates from The Radiators, Steve Averill and Pete Holidai, along with Shay Healy, Barry Devlin, Brush Shiels, Smiley Bolger, Simon Carmody, Gavin Friday and Aidan Gillen, who is playing Haughey in the new RTÉ drama.

His sister Deborah Blacoe said her late brother would be “enormously pleased” that here was nearly a full house for his grand finale.

She recounted how her brother developed oesophageal cancer in 2007 around the time of his 50th birthday and thought he had beaten it when he got the all-clear after five years. Unfortunately, the cancer came back worse than ever and he died aged 56 earlier this week.

She recalled his illness as a “long slow degeneration which he fought with every fibre of his being”, but was thankful her brother’s last request to be able to live out his days at home were fulfilled thanks to the devotion of their mother Christine.

Druid Theatre artistic director Garry Hynes recalled a man who was “mad about theatre”, but “deranged” about musical theatre. It was such a “crying shame” she said that he did not have decades more life to live.

Chevron had composed music as accompaniment for The Silver Tassie, and Druid are to dedicate their next production, The Colleen Bawn, to him.

Novelist Joseph O’Connor read a poem for Chevron which described him as a “million dollar hero in a five and ten cent story”.

Journalist and author Declan Lynch said Chevron had lived in a world which would never change to suit him, and so he made his own way by changing his name.

“He was a deeply sophisticated person growing up in a country which sought to value only eejitry, bad politics and bad music.

“He was a gay man who wrote the song ‘Under Clery’s Clock’ at a time when, according to the popular legend, there was only one gay man in Ireland - David Norris. ”

His former Radiators bandmate Steve Averill said The Radiators never received the commercial recognition they deserved. He described him as a “gentleman, musician and lasting friend”.

The funeral procession left the Mansion House to the sound of Chevron’s own version of Thousands Are Sailing, which became a Pogues classic and is recognised as one of the finest songs about Irish emigration.

He was buried in Dardistown Cemetery after the funeral service.