Eurovision: Sweden and Russia the ones to beat 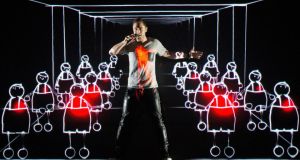 Sweden’s Mans Zelmerlow performs during rehearsals for the Eurovision Song Contest final. The Swede is one of the favourites to win this year’s competition. Photograph: Georg Hochmuth/EPA

By 8pm tomorrow, the results of the same-sex marriage referendum will almost surely be known, and the country will be wrung out and in the need of a little light entertainment.

Thank goodness, then, for the Eurovision Song Contest final - a contest in which, after Molly Sterling’s relegation on Thursday night, Ireland itself has absolutely nothing at stake.

Looking at the bookmakers’ odds, it’s a three-horse race between Sweden, Russia and Italy, with the little-singer-that-could from Belgium and wild card Australia nipping at their heels.

If the iTunes charts have anything to reveal, the contest is really between Sweden’s Måns Zelmerlöw and Russia’s Polina Gagarina. Since their performances in this week’s semifinals, his song has charted in 27 countries around Europe and hers in 28.

It is widely believed that a later place in the running order helps a song’s chances, and Russia is in pole position (25th out of 27), while Sweden will sing 10th, in the middle of a very fun run of songs - Serbia, Norway, Sweden, Cyprus, Australia, Belgium - during which readers are highly advised not to nip out to put the kettle on.

The Swedish and Russian numbers are very slick pieces of stage production, and both are written by groups of songwriter/lyricists not including the performers themselves.

The tricksy media feature of Russia’s A Million Voices is the projection of lights onto the skirt of Gagarina’s flowing white dress, one of several effects that add to her almost celestial quality onstage.

In this writer’s view, one of these artists is going to emerge the victor.

Italy’s Il Volo are a pop opera trio who automatically qualified for the final, because their country is one of the “Big Five” that gain a berth in the final in exchange for hefty participation fees.

In recent years, several hotly-tipped opera-influenced numbers have failed to deliver votes on the night – much will depend on how their song Grande Amore comes across onstage. However, coming last in the running order probably won’t hurt them.

Belgium’s Loïc Nottet is currently third in the Eurovision iTunes downloads chart with Rhythm Inside, one of the contest’s most youth-friendly and innovatively staged acts.

Tonight Again by Australia’s Guy Sebastian has arguably the most mainstream pop appeal of tonight’s contest, but the staging is weak in the bells-and-whistles department.

There’s a long snoozy bit from about song 15 (Greece) through to 22 (Hungary), before a big finish with Russia-Albania-Italy; then, of course, the real entertainment begins with the voting.

Much delight will be provided along the way via co-host Conchita Wurst’s shifting hairlines and spangly peplum jumpsuits.