The second night of the festival features sets from Saint Sister, Neon Indian and Floating Points among others 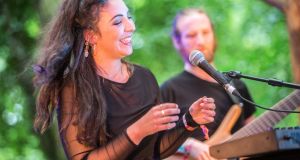 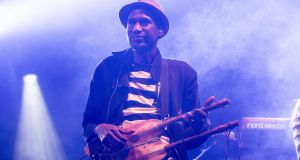 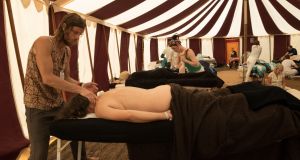 In the Woodlands, Morgan MacIntyre and Gemma Doherty very shyly take the stage. It’s packed, despite the fact the rain has just started. Slightly disbelieving at people being willing to stand in the rain to listen, they begin with some trepidation, like we might all disappear at any moment.

The soaring harp takes over, and their enigmatic sound creates a slightly magical atmosphere in the woods. Their mix of electro and folk is equal parts eerie and romantic, blending airy, emotive folk with deep electronica. Add their beautiful harmonies, and you’ve got some lovely, lovely listening. They came back for a sneaky encore, but we could have stood listening in the rain all night.

All five of Neon Indian come on in all white outfits. The crowd is slightly reluctant; it’s lashing and no one seems to know how they’ve ended up here. Frontman Alan Palomo doesn’t mind. Energy is one thing he’s not short of, and he’s got some moves he wants us to know about.

The American electronic band are here to have some fun; providing an exuberant, layered performance. Palomo worked himself into a dancing fit, twisting his shoulders, rolling his hips, crouching with fists pumping. He really feels the music, and his intensity has the crowd on board by the end.

There is a buzz-seeking solidarity palpable among the crowd at Floating Points, not typical of a day with such oppressively grey skies. Neuroscientist Sam Shepard delivers fuzzy, melty layers to one of the most panned out crowds of the two days so far. Beats are dissected and reworked casually so that they almost create an audio storyline. Backdrop visuals including digitised outlines of artforms in nature in bold black and white contrast, they set off the ethereal tone that seeps through the set. Several well calculated build-ups break through to something really special, creating a wall of sound that was uniquely successfully in keeping the quiet segments audible and the loud parts immersive. Some of the audience look distinctly as if they have been roused from a long slumber when the set ends, and they meander away in a suspended music daydream.

Silences begin slightly awkwardly, asking how the crowd feels about Ireland’s loss to Belgium in the football earlier in the day. “Aren’t you from the North?” someone shouts back. After a long explanation about how they align themselves to the Republic’s team, they get started with the music, inarguably their stronger suit.

There’s a lot going on, but the guitar, keys, drums and harmonies all come together seamlessly, making for an absorbing set. Frontman Conchúr White does his best to wrangle the crowd’s attention, switching up the set list to suit the more chill vibes in the Wanderlust tent, but the music speaks for itself. It’s all very heartfelt, with warmth beneath the sometimes-gasping vocals. Subtle, stirring and compelling.

A shimmering group of LA performance artists temporarily take over the Absolut tent by way of mesmerising interlude before Kormac plays. Lucent Dossier are a cirque troop like no other, deftly delving between acrobatic feats and bemusing interactive silent acting for a short set on the 360° centre stage. Their alternative circus is accompanied by ethereal electronic rock and diffusing vocals, while the show takes on a playful narrative of a children’s storybook. The writhing, gasping splendour holds crowd unblinking and captivated throughout until the opalescent ladies neatly bow and spring off stage.

Lucent Dossier leave the distinct afterglow of being impossible to follow, but Kormac follows anyway and instantly commands the room with his trademark audio teasing. Amusingly, the first thing Cormac O’Halloran does is applaud the audience member who led the crowd-wide sing-a-long to Twist and Shout in the interim before he started. His momentary spoofing transits into musical messing where he flips between ambient melancholy with heavy layers, deliberately kidding the crowd.

Kormac exhibits the most personal energy of any act so far, relentlessly riling up everyone in earshot and bopping more ardently than most of the weekend’s crowd. The LED wall behind him and his drummer displays an expertly crafted series of visuals that dumbfound everyone further. Ultimately Kormac steals the night back from bigger names.

Ludovic Navarre, the French musician behind the St Germain moniker, stands behind an altar-like mixing desk on stage. His sound combines nu jazz, afrobeat and house, and the crowd don’t quite know how to dance to it. They definitely want to dance, though.

The seven musicians on stage work hard to get the crowd involved. As they dance in sync, the crowd copies their side-sway. “Yay, flute!” someone shouts, as they flow into an impressive flute piece from flautist/saxophonist, Edouard Labor, before they switched into some slightly more heavy-hitting techno beats.

Hud Mo has grown immensely as a live act since the Twisted Pepper sets of yesteryear. He fills out the main arena by keeping the momentum strong throughout, dropping bass heavy electronic soundings for the entirety. The Glaswegian oozes less of his signature apathy than he used to, and deliberately plays his name-making tracks early in order to transition into a more interesting second half. Bold lights dissect the misty dark sky around him, illuminating the rain to somehow make it seem less bad.

Reaching For Height rouses a drop and build-up that replicate the energy of illegal basement raves, or maybe a teen disco. It’s all very well-received to the point that the earth heaves underfoot and his finishing set achieves a transcendental vibe.

The Reckless in Love stage has moved from the forest into a back field, offering much more space for wild dancing, and the Mother DJs took over all day, amply serving those needs. Entertaining crowds with DJ sets, a sing along social run by Aoife McElwain, and drag aerobics, there was plenty going on.

The final set early Sunday morning is something of a festival highlight every year, and this year it doesn’t disappoint. With the extra space, crowds packed in for neon, glitter and endless bangers, closing the evening on a high.

Desmond Morris on the Irish: ‘There’s a humour there, and a love of the eccentric'
3

Bravo! The winners of the 23rd Irish Times Irish Theatre Awards are here
9