A strong Russian accent at the NCH international series 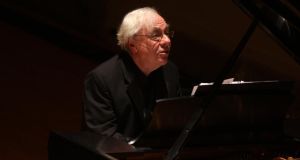 News is out on the National Concert Hall’s next International Concert Series. The Royal Concertgebouw Orchestra will open the series on Saturday, August 27th. The orchestra has a distinguished Bruckner tradition, and the composer’s Romantic Symphony is the climax of its Dublin programme, which will be given under its new principal conductor, Daniele Gatti. The soloist in Schumann’s Cello Concerto will be Sol Gabetta, who is already familiar to Irish audiences from a visit to the West Cork Chamber Music Festival in 2008.

The new season’s other major orchestral visitors are Russian: the St Petersburg Philharmonic Orchestra will play Prokofiev’s Third Piano Concerto (soloist Nikolai Lugansky) and Shostakovich’s Fifth Symphony under its long-standing music director, Yuri Temirkanov, on January 31st; and the Moscow Philharmonic will play Rachmaninov’s Second Piano Concerto (with Freddy Kempf) and an extended suite from Prokofiev’s Romeo and Juliet, under Yuri Simonov, on May 30th next year.

The NSO has an intriguing attraction in Maxim Vengerov. He will perform as soloist in the original version of Sibelius’s Violin Concerto – which has never been given in Ireland before – and he will also conduct the orchestra in Tchaikovsky’s Pathétique Symphony.

Korean violinist Kyung-Wha Chung returns after a long gap. She was last heard in Ireland in 1999, and had an enforced absence from the concert platform from 2005 due to a finger injury. Her programme with American pianist Kevin Kenner on October 17th will include Fauré’s Sonata in A and Grieg’s Sonata in F minor.

The Choir of King’s College, Cambridge, will perform under Stephen Cleobury on December 14th, and their programme will include Duruflé’s Requiem, as well as a selection of Christmas carols. The first concert of the new year features the American vocal ensemble Chanticleer, whose programme on January 22nd is titled My Secret Heart: Songs of Love from the 16th to the 21st Century.

The English choir Tenebrae, conducted by Nigel Short, offers an evening of Russian Treasures on May 10th, and the great Russian baritone Dmitri Hvorostovsky’s recital with pianist Ivari Ilja will also have a Russian flavour on April 29th.

The human voice is again to the fore in the season’s closing concert, when mezzo-soprano Joyce DiDonato joins the period-instruments ensemble Il Pomo d’Oro under Maxim Emelyanychev for the concert In War and Peace: Harmony Through Music.

There’s only a single solo piano recital, a 40th-birthday celebration for Finghin Collins on March 9th, although there is also an unusual pianistic double act on April 1st, when Marc-André Hamelin and Leif Ove Andsnes join forces for an evening that will include Stravinsky’s Concerto for two pianos and his Rite of Spring.

Booking for subscription packages is already open, and individual tickets will go on general sale this day week.

There have been some worthwhile innovations in the NCH’s international season lately, particularly through the inclusion of choirs. But the season that has just been announced continues a pattern of shrinkage that has afflicted the series in recent years. In 2013 the hall announced a season of 21 concerts, which has successively contracted to 16, 15 and this year’s 14 concerts.

The much-vaunted recovery seems to have had no impact on this aspect of musical life at the NCH. If you go back 10 years to the 2006-2007 season, there were eight top-rank orchestral concerts and 11 of what were then sold as “celebrity” concerts.

This year’s Great Music in Irish Houses has changed its name ever so slightly, but the loss of just three letters signifies the departure of its title sponsor, KBC Bank. Sponsor or no, the festival is still up and running, and will open in the National Botanic Gardens on June 7th, when the Carducci Quartet and Guy Johnston will play Schubert’s great String Quintet.

This year’s star attraction is American pianist Richard Goode, whose recital at Killruddery House on June 11th will include a rare opportunity to hear Schubert’s last three piano sonatas on one evening. The festival’s closing day, Sunday, June 12th, offers four city-centre concerts on the theme In Love with Shakespeare. greatmusicinirishhouses.com

This features John Zorn’s Book of Angels, James Dillon’s Book of Elements, Jakob Ullmann’s new Müntzer’s Stern, Jürg Frey’s 24 Wörter, and a concert of music for the viola d’amore. Some of these concerts are free.See louthcms.org

The busiest festival of them all, the West Cork Chamber Music Festival, takes place in Bantry July 1st-9th. The West Cork brochure lists the closing concert as the 72nd event.

The nine days are crammed with music-making, including new works by Deirdre Gribbin and Seán Doherty. Highlights beyond that include György Kurtág’s Kafka Fragments for soprano and violin (Caroline Melzer and Nurit Stark), Schubert’s Winterreise and Janacek’s Diary of One Who Disappeared (both featuring Mark Padmore), and Karl-Amadeus Hartmann’s Concerto funèbre with viola player Lawrence Power and a festival string orchestra. westcorkmusic.ie