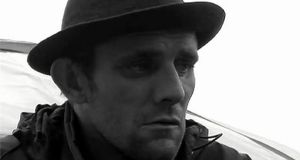 If you saw the latest episode of Love/Hate last weekend, there are probably a few scenes that stick in your mind. But there was one scene in particular which stood out in a mile, as the plot began to twist and turn and take unexpected leaps off balconies.

We speak of the bizarre house party featuring a bunch of reformed drug addicts leaping around yelling “Jesus saves”. One bug-eyed, ranting, raving character in particular jumped out from the TV screen – this is Tommy KD. Those of you with long memories may recall a Dublin rapper called Man & the Machine who used to perform on the streets of the capital around a decade ago. That was KD, and after a long absence, he’s back in the game with a new fierce and forthright single called Bag A Gear, on release from October 31st.

The single also marks the return of the Wexford-born, Galway-based producer Hazo. He was responsible for a slew of fantastic beats back in the 1990s under the Ill Dependents’ moniker, including a well-received EP for Ultimate Dilemma, so it’s great to see him back in action on this track as well.

KD’s appearance on Love/Hate will certainly ensure plenty of interest for the new tune, his next musical moves, his story and even future appearances on the small screen. It goes to show that you can have hard-hitting TV/music tie-ins that don’t have to be inane, mindless crud like Damo & Ivor’s recent effort.