Co Mayo hotelier Cathal Hughes has bought historic Westport House in a deal that will see €50 million invested in the 455 acre estate.

The Mayo-based Hotel Westport Ltd has bought historic Westport House in a deal that will see €50 million invested in the 455 acre estate.

The sellers, the Browne family who are descended from Grace O’Malley, have sold the house which they have run since the early 1960s.

The estate was put on the market last February with an asking price of €10 million, and with debt of around €1 million. It attracted interest from the US, Asia Europe and from Ireland, with many hoping it might end up in State ownership. Mr Hughes is believed to have entered negotiations just before Christmas. The selling agent was Robert Ganly or Ganly Walters.

Cathal Hughes (64) and his brothers Harry (61) and Owen (60) run a highly successful west of Ireland business dynasty that includes the Portwest outerwear firm which is sold in 100 countries worldwide and had a turnover last year of around €125 million. Its head office in Westport employs over 100 people and continues to expand. The Hughes family also own the four-star Hotel Westport in the town where 80 people are employed. Two other Hughes brothers, Vincent  and Pat, own the carraig Donn fashion and homeware chain with over 35 outlets.

The Hughes’s have not indicated what they plan to do with Westport House and the surrounding land, except to say they will "invest up to €50m in new facilities which will lead to the creation of 200 new jobs over the next five years". The ultimate aim they said is to make Westport House a leading tourist attraction in Ireland, but they have assured existing staff, suppliers and customers that the House will continue to operate as normal under the new ownership.

The Browne family reluctantly agreed to the sale of the estate, following an accumulation of debt more than a decade ago. Difficulties arose after 380 acres of the estate were put up as security on a loan of €6.5 million taken out by Lord Altamont, one of the Browne family, in 2006 as part of plans for further development. The recession hit and the loan was acquired by Nama, amounting with interest to more than €9 million.

In 2015, Nama included the loan in its Project Arrow portfolio but, amid local fears that the house and estate could be broken up, it was withdrawn just 24 hours before the portfolio’s sale to American investment fund Cerberus after Government intervention.

At that stage, Minister of State and local TD Michael Ring defended the move, made under Nama guidelines which allow for State purchase “in the public interest”. 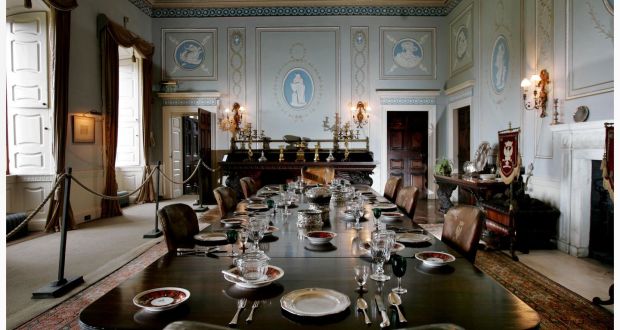 In pictures: inside Westport House

Speaking after the sale was announced, Mr Ring said at one point “we were 24 hours” away from losing the land, which he said “could have gone into a vulture fund somewhere around the world”.

In a statement issued, Sheelyn Browne, daughter of Lord Altamont, who died in 2014, described it as an emotional day for her family.

“On the one hand, we are handing over custody of our ancestral family home after hundreds of years but we are doing so in the knowledge that the new owners are committed to bringing to fruition the ambitions and dreams of our late and much loved father, Jeremy.”

Ms Browne told The Irish Times at the time when the house went on the market “that amid her devastation at the loss, there is also some relief that the huge responsibility for this historic home will be passed on to someone who can afford to invest in it.” The house, she said, was “stagnating.”

The deal will include many of the house contents, according to a property source. “The house is being sold on a lock stock and barrell basis,” the source said. “It is logical for them to buy it this way. “There would be no kudos in having everything out on the lawn to be sold.”

Built in 1730, the house survived “English Williamites, a French invasion, two fires, a famine and civil war”, according to the 10th Marquess of Sligo, Denis Browne, who died in 1991. It was opened to the public by his son, Lord Altamont, in 1961.

Reputed to be built on the foundations of a castle owned by pirate queen Grace O’Malley (Granuaile), the original Westport House was built in 1679 by Colonel John Browne after he married Maud Burke, Grace O’Malley’s great-granddaughter.

It was completed by English architect James Wyatt who was also commissioned by John Browne, the 1st Earl of Altamont, to lay out the town of Westport, Ireland’s first planned town.

A report commissioned in 2015 by Mayo County Council found there were 162,000 visitors to Westport House in 2014 contributing €1.7 million to the fiscal purse and the local economy, with 60 per cent of respondents citing Westport House as their main reason for visiting Mayo.

Commenting on the sale, Taoiseach Enda Kenny said he was delighted that this issue has been resolved.

Lord Altamont died in 2014. It is understood that Jennifer Altamont, his widow, will continue to live in her home on the estate, which is not part of the sale.

Scandal, silence, shame: the careful retelling of a buried story