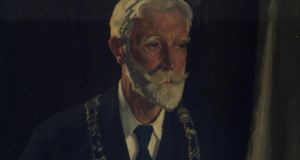 Last night a small plaque was due to be unveiled to one of this country’s most forward-thinking and successful entrepreneurs; a nationalist patriot, a media mogul, a job creator, a patron of the arts: William Martin Murphy. The objections started rolling in last week.

“A man rang me to say that it was an insult to the working class,” says Fachtna O’Donovan of the Beara Historical Society. “He was very polite, and passionate. I took his point.”

The plaque, unveiled on a modest farmhouse – now a barn – in the townland of Derrymihin West, about a mile outside Castletownbere in west Cork, identifies the birthplace of William Martin Murphy, one of the district’s most successful sons.

He was the implacable leader of the employers during the 1913 Lockout, which started 100 years ago on Monday. As far as Fachtna O’Donovan knows, the new plaque at Derrymihin will be the first public commemoration of William Martin Murphy in the country.

It has always been said that Martin Murphy’s grave, in the family vault at Glasnevin cemetery in Dublin, is unmarked; but then so are the majority of the 42 vaults in that section. The lettering on the plaque explaining the history of Dartry House, in south Dublin, where his family lived for 70 years up to 1958, is so small that one has to squint to read it.

Swinging for Murphy
But there is one item that proudly bears the name of Murphy, and has done so since well before the Lockout. The William Martin Murphy Cup is played each summer in Milltown Golf Club, close to the businessman’s old home at Dartry House.

Sitting on the sturdy balcony of Milltown’s modern clubhouse – the pretty pavilion clubhouse was destroyed in a fire in 1958 – overlooking both the ninth and the 18th, smiling club members are matter-of-fact about the cup.

Strikes may come and strikes may go. Industries can rise and fall. Old technologies crumble and new technologies are born, but the century since the Lockout has had one unchanging idea – golf.

The William Martin Murphy is a fine elongated silver cup, with slightly squared handles, and the names of its winners crowd its surface. There is space now only on the foot of the cup for the names of future winners to be inscribed.

“It used to be a 36-hole competition, then it was reduced to 27 holes and now it’s down to 18,” explains Eamonn Beale, the club’s historian. The William Martin Murphy Cup is one of Milltown’s more important trophies, coming after only the President’s Prize and the Captain’s Prize.

Brian O’Driscoll is a current member of Milltown. Past winners of the William Martin Murphy Cup include several rugby internationals: Michael O’Flanagan, who played both soccer and rugby internationally, won it in 1948 and 1949; the Army showjumper PJ Kiernan (1965); and the late Hector Legge of the Irish Independent, the newspaper Martin Murphy founded (1981).

Martin Murphy didn’t play golf; his main interest was sailing. Nevertheless he endowed the cup in his name when Milltown was established in 1907. He was a founding member and the first president, a post he held until his death in 1919.

His son, William Lombard Murphy, would be club president from 1948 to 1953. Milltown was founded by a group of men who were members of the Leinster Club on Clare Street. Most were prosperous Catholics who wanted a golf club on the southside of the city.

By 1911 Milltown had 14 staff, including a man identified only as “Mr Bush”, who was the resident clubmaker. The club staff, and its president, Murphy, gaze calmly out of their respective sepia photographs, not knowing of the turmoil that was to come.