The shooting of a bird of prey

The killing of Heather, a hen harrier that had become a conservation mascot for schoolchildren, shows the irrational hostility some people feel towards these birds 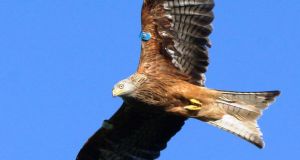 Raptors – birds of prey – have taken a pretty bad rap on our airwaves, in print and, worst of all, in the air in recent weeks. This is puzzling. Birds of prey have been celebrated by many human cultures down the ages. Most people respond with awe and delight if they are lucky enough to see an eagle, a kite or a falcon up close, or witness their spectacular aerial acrobatics, “sky dances”, and food-passing displays. But they can also attract irrational hostility.

It has taken the illegal shooting of Heather, a radio-tagged hen harrier that had become a conservation mascot to schoolchildren who were following online her journeys across the country, to bring this most dramatic and beautiful class of birds back into positive focus. Yet again, it seems we don’t know what we’ve got until it has gone.

The latest flurry of anti-raptor comments started with an uncharacteristically ill-informed radio exchange between Pat Kenny and Prof Luke O’Neill, of Trinity College Dublin, on Newstalk. This interview, replete with remarks such as “these horrible birds”, gave the impression that the recently reintroduced red kite, which largely feeds on rodents, crows and earthworms, was somehow responsible for the crash in our songbird populations.

In fairness, the professor, who is an expert in immunology, has apologised for his comments, after being politely but firmly corrected by his natural-sciences colleagues on Trinity’s Ecology and Evolution blog (ecoevoblog.com).

Then a Co Kerry councillor, Johnny Healy-Rae, was reported in Kerry’s Eye and the Kerryman as blaming conservation measures to protect hen harriers for causing hundreds of local farmers “untold hardship” and rendering their farms “worthless”. Why, he asked, don’t we “put the hen harriers into the national park, like the eagles? I’m asking you not to make a wild bird more important than people.”

A week later someone shot a hen harrier in Kerry, and happened to choose the very bird of prey whose adventures have been followed, on henharrierireland.blogspot.ie, by thousands of schoolchildren.

The shooter was clearly not thinking of the many people in the county dependent on wildlife tourism. Kerry’s reputation in this market has been hammered in recent years, by the poisoning of white-tailed eagles, the poaching of the last truly indigenous red deer herd in the country, and the beheading of seals. Nor does the shooter represent the majority of farmers, who enjoy seeing nature flourish on their land.

Certainly, the relationship between nature and farming is complex, and has been poorly handled by successive governments. Ministers pay lip service to EU conservation targets while grossly underfunding the agencies, such as the National Parks and Wildlife Service, tasked with implementing them. If we start to think that the key issue is birds versus people, we are all losers.

But if Healy-Rae overstates current problems, he is tapping into a legitimate frustration felt by many marginal farmers. Partly because of cutbacks after the crash, far too few of them were able to avail of the payments incentivising nature-friendly farming in the special protection areas designated for hen harriers and other species. And these payments are capped far too low, at €5,000 a year, and do not take proper account of farm sizes.

When our marginal farmers abandon holdings that are often no longer commercially viable, scrubland usually quickly dominates the mosaics of habitats that birds such as the hen harrier need to survive and that farmers used to keep open. There is surely something encouraging about this mutual dependence between our own and other species.

With luck – don’t hold your breath – the new raft of agrienvironmental measures due to be announced this month, known as the Glas programme, will at last reward farmers properly for environmental stewardship. If our society wants nature conservation it should pay for it.

In the meantime it’s worth taking some comfort from considerable advances in recent decades, and celebrating the benefits they have brought us.

The good news is that the shooting of Heather is a wild aberration today. Persecution of raptors by gamekeepers, and then habitat loss, plus the use of lethal pesticides by farmers, were once so common that most of our larger birds of prey became extinct. We lost the red kite centuries ago, and both golden and white-tailed eagles were gone by 1900. We very nearly lost the buzzard, the peregrine falcon and the hen harrier in the decades that followed.

When I was a boy, in Co Wicklow in the 1960s, I was lucky to see four raptor species (excluding owls) in the course of a year. Now I often see five species in a single day – seven if I put my boots on.

The banning of the most lethal agricultural poisons has enabled the dramatic recoveries of the buzzard and the peregrine; habitat shifts have helped the still tenuous return of the hen harrier; and red kites and both eagle species have been reintroduced, although with varying degrees of success.

There is a place where you can easily witness this raptor recovery for yourself, in one of its most spectacular manifestations. Stand on the bridge in Avoca, Co Wicklow, an hour before sunset on any clear winter evening and you should see up to 50 red kites, resplendent in russet and ermine plumage, displaying communally before they roost for the night.

Richard Mabey credits such a display, in his poignant Nature Cure, with helping him overcome depression. That might pitch it a bit high for many of us, but his description can’t be bettered: “They were exalted, falling out of the sky . . . stooping, spiralling, stalling, their forked tails fine-tuning their balance so effortlessly that it looked as if they were juggling the wind.”