The Irishmen who fought for the pope

An Irishman’s Diary on the volunteers for Pope Pius IX 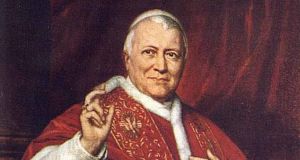 Approximately a thousand Irishmen answered the call and travelled to Italy to fight for Pope Pius IX against the forces of King Victor Emmanuel who wanted to unify Italy in a process known as the Risorgimento.

It may have slipped slightly out of public memory, but just a little over 150 years ago, a call went out in churches and parishes around Ireland for Irishmen to fight for the pope. Approximately a thousand Irishmen answered the call and travelled to Italy to fight for Pope Pius IX against the forces of King Victor Emmanuel who wanted to unify Italy in a process known as the Risorgimento.

Of course, it was not unusual for Irishmen to fight in foreign armies on the Continent. For centuries, significant numbers of Irishmen had made their way to Europe to fight on battlefields in the Netherlands, France, Spain and Germany. We only have to look at the so-called “wild geese” for a well-known example of this, or think of names such as Lally and Dillon, which have become synonymous with the Irish who fought in Europe.

However, it was unusual for Irishmen to go and fight for one specific cause, as they did when they formed the Irish Papal Brigade in the summer of 1860. What also marked these men apart was that they were not, by and large, trained soldiers, but rather worked as farmers, labourers and in the professions. A small percentage of them had rudimentary military training, while some had served in the British army. They also counted a small number of RIC men among their ranks.

They were recruited to defend the Papal States from the forces of Italian unification. The Papal States, which had been run by the pope from around the 8th century, were a vast stretch of land in central Italy, which includes modern-day regions such as Umbria, Lazio, Marche, as well as parts of Emilia-Romagna. In terms of size, they covered an area of land that would take in Munster and Connacht combined. The reigning pope was the de jure ruler of this state, but by all accounts, it was not very well run and its inhabitants were, therefore, delighted at the prospect of being part of a unified Italy.

The call for volunteers was made at Masses and meetings all over Ireland, where the case was made for men to go and defend the pope’s temporal authority. Collections were also made around the country and the money raised was sent to Rome to help the effort financially. A list of sums donated was kept and regularly recorded on the front pages of many newspapers, perhaps to gently encourage others to do likewise.

It was difficult for volunteers to travel to Italy directly because of the Foreign Enlistment Act, which barred British subjects from enlisting in foreign armies. To reach there safely, they often travelled in a circuitous route and gave their reason for travel as pilgrimage or said that they were travelling for work. In one case, a group of men from Limerick sailed to Wales, from where they took a train to London. They then sailed on to Belgium and travelled by rail through Germany and Austria, encountering well-wishers at stations along the route. It’s said that at one town near Vienna, 20,000 people tuned out to see them.

Grandiose promises were made in Ireland before the men set off for the Continent, including one that they would fight in a single brigade under Irish officers.

However, when they arrived in Italy, the men were divided up and put in different units with other volunteers from France, Italy, Austria, Switzerland and Belgium.

At first, living conditions were poor and uniforms and weapons consisted of outdated surplus stock. They quickly set about training and drilled regularly for some months. War eventually broke out in September 1860 when Piedmontese troops made an incursion into the Papal States. Hostilities lasted for just 18 days.

The reality was that the papal army was spectacularly ill-prepared and ill-equipped, and could not put up any sort of sustained defence against the well-equipped professional soldiers they encountered. The Irish fought in several battles against the troops of the Risorgimento, notably in Perugia, Spoleto, Castelfidardo and Ancona.

After the war, the Irish volunteers were rounded up and eventually transported back to Ireland, arriving into Queenstown (Cobh) from Le Havre on November 3rd, 1860. Church authorities were divided around how to mark the men’s return. Cork’s tailors made up a thousand tweed suits, which were distributed to replace the worn uniforms that the men were wearing. A crowd of locals gathered to welcome them and bands played on boats alongside, as a unique chapter in papal and Irish history ended at Cobh.