The constitutional heritage of the Irish revolution 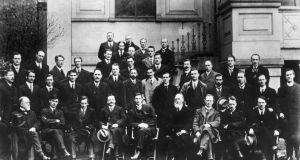 The revolution of 1916-1923 is usually presented in our history books as part of the physical-force tradition of Irish nationalism, but in reality it was played out as much in the arena of constitutional politics as in the violence of 1916 and the War of Independence.

The year 1918 was critical in defining this aspect of the revolution, with Sinn Féin scoring an overwhelming victory over the old Irish Parliamentary Party in the general election held in December – 73 seats, as against a mere six for the Irish Party. Moreover, Sinn Féin had previously contested and won four celebrated by-elections in 1917, and in 1919 the Sinn Féin MPs would establish Dáil Éireann and its shadow administration to challenge that of Dublin Castle – following the parliamentary model of government at Westminster.

Indeed, the fact the War of Independence was prosecuted under the nominal authority of the first and second Dáil was, and remains, its source of legitimacy. Unlike the Rising in 1916, it could claim an electoral mandate – though even the rebels in 1916 had looked forward in their Proclamation to “the establishment of a permanent National Government, representative of the whole people of Ireland and elected by the suffrages of all her men and women”.

As the late Brian Farrell observed in a Thomas Davis Lecture in 1972, the leaders of the Irish revolution “did not seek to destroy the institutional status quo in Ireland; they sought to take it over”. They commandeered the parliamentary tradition inherited from Charles Stewart Parnell and his successors, and used it for their own purposes – and the governmental apparatus of the new State that emerged after 1921 drew upon that tradition in almost every detail.

Why did the Irish revolution, drawing its inspiration from a cult of political violence, not repudiate the parliamentary tradition? The obvious explanation – which the leaders of the revolution would have been loath to admit – is that constitutional politics had served the Irish people well, especially in the four decades before 1916 when the Irish Party under Parnell and later John Redmond skilfully exerted pressure in Westminster to demand a solution to the land question and to address other grievances. Parliamentary agitation in those years had delivered ameliorative measures that transformed Irish society beyond recognition. Moreover, the Irish Party had come within a whisker of winning Home Rule, only to have it postponed at the outbreak of the first World War.

One of the criticisms often made of the Irish revolution of 1912-1923 is that it was exclusively political. Some elements of the revolution – for instance, the participation of the Citizen Army in the Easter Rising and the adoption of the Democratic Programme by the First Dáil – had seemed to indicate the political revolution would be accompanied by a social one, but that was not to be. For many, that compromised the value of the independence won with so much blood and sacrifice.

However, focusing on the absence of a social revolution in tandem with the political one is to miss an important point. There had already been a social revolution in Ireland – the result of those ameliorative measures that had been achieved through parliamentary agitation in the late 19th century and in the early years of the 20th century. From this perspective, the revolution of 1912-1923 was the end of a process of change in Ireland – not the beginning.

The changes had begun with the disestablishment of the Church of Ireland in 1869 – and that was followed by the Ballot Act 1872, which introduced the secret vote and hence strengthened Irish nationalist representation at Westminster. Then came the Land War, leading eventually, with Wyndham’s Land Act 1903, to the wholesale transfer of the land of Ireland to owner-occupation. In addition, 1898 saw the democratisation of local government in Ireland, and in 1908 the National University was created – and it would provide educational opportunities that had previously been denied to the Catholic elite in Ireland. All these developments, carried by Liberal and Tory administrations under pressure from the Irish Party at Westminster, changed the social and economic landscape in Ireland.

Today, these changes are overshadowed by the 1916 Rising and the War of Independence. The decades before the Rising are thus dismissed as, in the words of Conor Cruise O’Brien, “a sort of crease in time, a featureless valley . . . a time in which nothing happened”. Yet, as the historian Ian d’Alton has argued, the incremental progress made through government initiatives in the years 1869 to 1916 was probably more significant in shaping modern Ireland than “all the dreamers, poets, dynamiters, language enthusiasts and [RADICAL]editors put together”.

Certainly, one prominent British politician, Arthur Balfour, thought so: a former prime minister and more importantly in this context a former chief secretary for Ireland, he spoke in 1928 of “the Ireland we made” – and he was proud of the conservative, devout country of land-owners and petit bourgeoisie that Ireland had by then become. The 1916 Rising, the general election of 1918, the establishment of Dáil Éireann and the violent struggle that followed must be seen as elements – the tip of the iceberg – in a greater Irish revolution spanning 50 years in the late 19th and early 20th centuries.

The Land War was a critical part of this greater revolution, and probably the one with the most profound consequences. There were two phases in the Land War: the first from 1879 to 1882; the second, the so-called Plan of Campaign, from 1886 to 1891. Traditionally portrayed as the inevitable consequence of, and response to, a rapacious landlord system, this is no longer regarded as a tenable interpretation of what happened. Taking a cue from work such as James Donnelly’s magisterial The Land and People of Nineteenth-Century Cork, published in 1975, historians now tend to treat the Land War more as a “revolution of rising expectations” resulting from the determination of tenant farmers to preserve their recent material gains in a period of temporary agricultural crisis.

There was a mid-Victorian boom in Irish agriculture in the decades after the Famine, and the majority of tenants throughout the country had enjoyed, to quote from an essay by Professor Vincent Comerford, “an era of palpable prosperity”. A collapse in agricultural prices in the late 1870s and again in 1886, brought that boom to an end. The loss, or even the curtailment, of their expectations of continuing and ever-growing prosperity propelled Irish tenant farmers into the Land League and later into the Plan of Campaign.

The concept of a “revolution of rising expectations” was developed by the French intellectual and diplomatist, Alexis de Tocqueville, in the 1850s in his history of the French revolution. He wrote: “It is not always by going from bad to worse that a society falls into revolution. It happens most often that a people which has supported without complaint, as if they were not felt, the most oppressive laws, violently throws them off as soon as their weight is lifted.”

In other words, revolutions “seldom, if ever, take the form of mere spontaneous outbursts against tyranny, oppression or utter destitution; both the experience of and the hope of something better are important factors in the story” – that passage is taken from George Rudé’s elaboration of Tocqueville’s theory.

Like the Land War, the Irish revolution of 1912-1923 conforms to the classic model of “a revolution of rising expectations”. The social and economic advances enjoyed by the vast majority of the Irish people in the period since 1869 created the circumstances that brought about the 1916 Rising, Sinn Féin’s victory in 1918, the first and second Dáil and the War of Independence. These advances had prompted expectations of further gains. Home Rule, as envisaged since 1886, would have been the next step in this process of incremental progress. It embodied the hopes of the Irish people, and it appeared to have been secured in 1912. Once again, however, the aspiration to self-government was frustrated. Expectations were dashed, and revolution ensued.

The failure to effect another social revolution alongside the political one parallels the strong element of continuity evident in the political sphere in the period 1912-1923. It is, therefore, a gross exaggeration to suggest that “All changed, changed utterly” in the Irish revolution.

The changes in politics and society were not nearly as fundamental as is sometimes represented – and this is reflected in a recent study by Brian Ward, Imagining Alternative Irelands in 1912. Drawing on a wide-ranging review of the periodical press in Ireland, Ward shows that “many of the key conceptions of nationalism that fed into the creation of the [Irish]Free State were already evident and in practice a decade prior to the Irish revolution”.

The societal landscape that characterised the new state was in place well before the revolution, the result in large measure of the process of change in Ireland that stretched back to 1869. That landscape was essentially unaffected by the revolution, though ironically the changes that had already occurred helped create the circumstances – the “rising expectations” – that led to revolution.