Rubble, ruins and the grim aftermath of the 1916 Rising 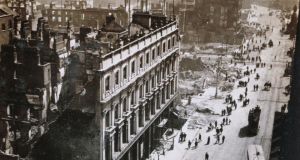 The Imperial Hotel and Clerys on Sackville Street, looking south from Nelson’s Pillar on May 18th, 1916. Photograph: TJ Westropp, courtesy of the Royal Irish Academy. 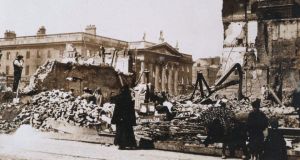 A view of the GPO from Abbey Street on May 17th. Photograph: TJ Westropp, courtesy of the Royal Irish Academy. 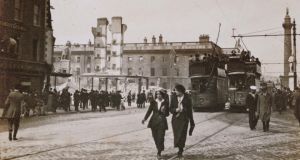 Pedestrians and trams on the street in Dublin on May 18th after the Easter Rising. Photograph: TJ Westropp, courtesy of the Royal Irish Academy. 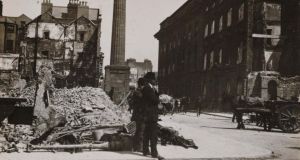 Henry Street on May 18th after the 1916 Rising. Photograph: TJ Westropp, courtesy of the Royal Irish Academy 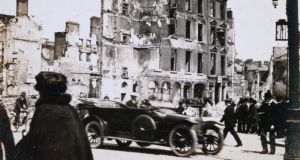 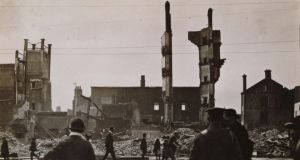 The ruins of the Hotel Metropole, Sackville Street, May 17th, 1916. Photograph: TJ Westropp, courtesy of the Royal Irish Academy 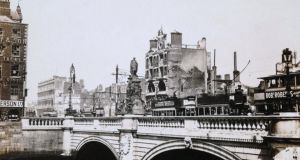 A collection of photographs depicting Dublin in the wake of the 1916 Rising has been released online as part of the newly launched Digital Repository of Ireland.

The 40 photographs, taken by Limerick antiquarian and engineer Thomas Johnson Westropp, show the damage and destruction left by the rebellion and British response.

Taken on May 17th and 18th, 1916, they depict Dubliners going about their daily lives against the backdrop of rubble and ruins. British soldiers stand guard as trams pass the GPO and workers remain focused on the ongoing effort to clean up the city.

Westropp captured aerial views of O’Connell Street, then named Sackville Street, from the top of Nelson’s Pillar, despite the British army regulating access to the viewing platform at the time.

The photographs are taken from a bound volume entitled Ruined Buildings in Dublin after the Sinn Féin Rebellion, as the Rising was popularly called at the time, which Westropp submitted to the Royal Irish Academy (RIA).

They are being made available as part of the digital repository, which is working with the RIA and educational institutions to provide an accessible online database of Irish cultural material.

Westropp was a well known antiquarian, and a noted member of the RIA, but little is known of his motivation for photographing the aftermath of the Rising.

Born in Patrickswell, Co Limerick in 1860, he attended Trinity College in Dublin,

In pen and ink sketches, and occasionally in photographs, he documented the Norman and Celtic antiquities of Clare and Limerick.

“He devoted most of his life to antiquarian research”, according to Siobhan Fitzpatrick, librarian of the RIA.

Westropp had the photographs developed and bound, with multiple copies submitted to Dublin institutions, including the RIA and Trinity College. Each photograph was presented with a detailed description of its location.

A dedicated archivist, Westropp also gave the RIA more than 3,000 of his antiquarian sketches.

Natalie Harrower*, acting director of the repository, said while nothing was known about Westropp’s political outlook, there was no reason to think he had any political motivation for the photographs.

“As historians and archivists, you find that most people are much less political in the moment than we expect them to be when we look back.”

The photographs are available on Digital Repository of Ireland’s website, dri.ie, and the original prints can be viewed by request in the RIA.

Alfre Woodard: ‘I love coming to Ireland, but we’re the pariahs now’
9