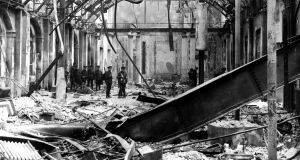 Soldiers survey the interior of the GPO in Sackville Street, Dublin, during the 1916 Easter Rising. Photograph: Hulton Archive/Getty Images

A new website containing details of thousands of compensation claims by individuals and businesses following the 1916 Easter Rising has been launched by the National Archives.

The site contains more than 6,500 compensation claims, which were submitted to the Property Losses (Ireland) Committee in relation to the damage caused to property and personal belongings during the intense fighting of Easter Week 1916.

The physical records have been stored at the National Archives building on Bishop Street in Dublin for the last three decades, but the entire collection is now available online.

The new website is searchable by claimant, location and business.

The site is the result of a concerted digitisation effort by record-keepers at the archives, as well as the work of conservators who restored damaged files.

The claims range from requests to cover the costs of personal effects destroyed in a jewellers close to the epicentre of fighting on Sackville Street, now O’Connell Street, to entire buildings which had to be rebuilt following the Rising.

Famous names, including artists Jack B Yeats and John Lavery and famed suffragette Hanna Sheehy-Skeffington, were among the applicants for monetary relief.

Yeats saw three of his paintings destroyed by fire at the Royal Hibernian Academy on Lower Abbey Street, and expressed his bemusement after receiving half of the value he had attributed to the items in compensation.

“I now write to formally protest against any reduction in the amount of my claim.

“The values of the pictures were taken from the prices in the catalogue of the Hibernian Academy, which were absolutely net prices. I ask for the settlement of my claim in full,” he wrote to the committee.

Some applicants appended accounts of their experiences of the fighting alongside the standard submission form.

British army sergeant Edward Henry’s notes recalled his own capture and detention in the GPO by insurgents,.

He requested in his submission £2 5s for “articles of private property”, including a coat, a pair of gloves and a “toilet outfit”, that were seized by the rebels.

Some requests originate from Enniscorthy, where gun battles also took place, and Co Galway, where the caretaker of Moyode Castle, John Shackleton, claimed to have been forced to leave his home after giving evidence against “Sinn Féiners” who took over the property during the insurrection.

Department store Arnotts submitted one of the larger claims, worth £12,155, for “damage to buildings, motor vans, stock, fixtures and fittings by fire and water, and for stock looted”, while competitor Clerys vented its frustration at the committee for the delay in receiving the full £78,299 for which it had asked.

The committee met for 10 months following the Rising, before submitting its final report to the British government in 1917.

Many insurance companies at the time refused to pay out for damages which were inflicted as a consequence of acts of war.

“These files go into incredible detail, listing the individual stock items lost by businesses during the Rising and providing us with a window into the homes of 1916, as people claimed for personal effects, both small and large,” said Minister for Arts, Heritage and the Gaeltacht Heather Humphreys at a launch ceremony for the website on Wednesday.

The Crown and the assassination of Lord Mountbatten: fact or fiction?
5

The poisonous myth: Democratic Germany’s ‘stab in the back’ legend
8