Ireland’s industrial heritage: the past you might not know we had

Our industrial history is often overshadowed by Britain’s. National Heritage Week wants us to celebrate a legacy that paved the way for how we live today 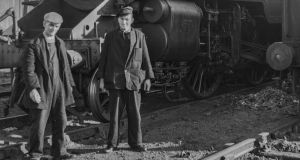 Old times: a photograph from the collection of the Irish Railway Record Society. Photograph: George Mahon/IRRS 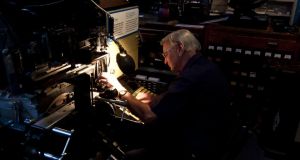 Lots of us would say that Ireland didn’t have much of an industrial revolution. Colin Rynne would like us to think again. Dr Rynne, an industrial archaeologist at University College Cork, says the problem is that we compare ourselves to Britain, which was at the height of its empire building during its industrial revolution, rather than to more similar countries, such as the Netherlands and Belgium.

“Ireland performed quite well compared to other European countries. In the 17th century Irish ports were the cornerstone of English transatlantic provisions trade. It had one of the best road systems in Europe in the 18th century. The first steam ship crossed the Atlantic from Queenstown” – or Cobh – “to New York in 1838, and we had the first flashing lighthouse, on the Galley Head in Cork,” he says.

That Ireland was part of the British Empire at the time tainted the story of industrialisation here. “It was barely acknowledged in legislation, and its historical significance was clouded in a postcolonial mentality,” says Rynne, who has written about our manufacturing past in Industrial Ireland 1750-1930.

There is much to celebrate about Ireland’s industrial heritage, he says. “We had a huge linen industry in the North. The Harland and Wolff shipbuilders in Belfast was the largest in the world in the 1920s and 1930s, employing almost 30,000 people, and the Guinness brewery was the largest brewery in the world.”

Another reason why we tend not to associate Ireland with industrialisation is that we had far less coal and iron – primary resources for heavy industry – than Britain. “Ireland remains the only country in Europe that doesn’t have a commercial coal mine,” Rynne says. Instead Irish mining concentrated on copper, lead, silver and, to an extent, gold.

And there was industrialisation of agriculture, with crops grown for food production and the clothing industry. Grain stores, flour mills, and linen and cotton mills were built across the country, close to the crops that supplied them.

In the mid 1850s the Famine led to rural depopulation, through emigration and, in many cases, death, and subsequently to the expansion of towns and cities. This population shift “set the scene for the development of urban industries, with steam power, mechanisation and factory labour becoming the norm,” Fred Hamond and Mary McMahon write in Recording andthe Conserving Ireland’s Industrial Heritage, a Heritage Council guide. The provision of utilities – water, sewerage, gas and electricity – for this growing urban population became another important part of Ireland’s industrialisation.

The development of the peat industry meant that turf needed to be moved around Ireland, so it could be used as fuel in urban as well as in rural areas. It was transported by the same network of railways and canals that was used to move other goods, as well as people.

Colin Rynne says that, perhaps surprisingly, some aspects of industrialisation happened here before they did in Britain. The Newry Canal, for example, was the first “summit level” canal – one that connects two water-drainage regions – in Britain or Ireland, and the streets of Dublin were paved before those of London.

Dr Hamond, an industrial archaeologist based in Belfast, says there has been much interest over the past 20 years in industrial heritage. He, McMahon and Rynne play key roles in the Industrial Heritage Association of Ireland, which helps to promote our industrial past. An archive is slowly developing of our bridges, canals and railways, as well as of derelict mills, despoiled landscapes and rusting machinery that mark the sites of once thriving industries. And the Inland Waterways Association of Ireland, the Irish Steam Preservation Society, the Mining Heritage Trust of Ireland and the Ulster Aviation Society, among other, are all playing their part in celebrating some of the estimated 100,000 sites of industrial interest in Ireland.

The Heritage Council has also promoted industrial heritage through grants for site surveys and funding for industrial-heritage associations. And while funds are much tighter than they were a decade ago, the council is central to the focus on industrial and design heritage in this year’s National Heritage Week, from runs from today until August 30th. Northern Ireland will join 22 other European countries in the celebration of their industrial past next month, during European Heritage Days.

But, generally speaking, our industrial-heritage sites attract far fewer tourists than our country houses, castles and older archaeological sites. Hamond says he’d like people to champion their local industrial sites into the future.

“When you consider that the whole economy of Ireland is based on industry, the big houses wouldn’t have survived without the industries they developed, and more people are connected to the people who worked in these industries, you have to ask why industrial heritage isn’t more recognised.”

The oral histories of workers in mines, mills and distilleries should become key parts of museum collections and guided tours, he says.

“A lot of people associate archaeology with what is below the ground, but I’m much more interested in what’s above ground. When you combine the memories of people with ordnance surveys and field evidence, you can build up a big picture of the effect on society, the economy and the landscape of these industries.”

Finding new uses for former mills, as well as for the distilleries that once dotted Ireland, is another approach. The results are evident, among other places, at Kilbeggan Distillery Experience, at the former Locke’s whiskey distillery in Kilbeggan, Co Offaly, the tea room at the former woollen mill in Glanworth, Co Cork, or the conversion of the corn mill in Clonakilty, Co Cork, to a public library.

So where should people start in terms of looking at and understanding our industrial heritage? Colin Rynne suggests a walk along the Grand Canal, to see its bridges and locks, a visit to the Steam Museum in Straffan, Co Kildare, or a trip to the National Maritime Museum of Ireland, in Dún Laoghaire. Or how about a walk from Poolbeg Power Station, at the southern tip of the Liffey quays in Dublin, along the South Wall to Poolbeg Lighthouse, to take in both the past and the present of Ireland’s maritime industry?

Dalkey Quarry Rob Goodbody, author of The Metals: From Dalkey to Dún Laoghaire, will talk about the source for the building of the railways, Dalkey Castle, Wednesday, August 26th, 7.30pm, 01-2858366, dalkeycastle.com.

Printing heritage The National Print Museum is making its daily interactive guided tours free for National Heritage Week, to help show the role of printing in Ireland’s industrial heritage. The 11.30am tours are suitable for adults, with demonstrations of the collection; the 2.30pm activity-based tours are suitable for families. Monday, August 24th to Friday, August 28th. Book on 01-6603770; nationalprintmuseum.ie.

Five lessons of Stoicism: What I learned from living for a week as a Stoic
9