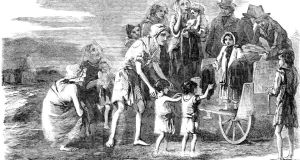 Under the Irish Poor Law Act of 1838, Ireland was divided into 130 Poor Law Unions, each centred on its own workhouse. The boards of guardians of each union, comprising elected and ex-officio members, were given power to raise local property taxes, the rate varying from one electoral division to the next, and the proceeds spent locally on the relief of the poor. Little was it realised at the time how this new system would be put under strain by the arrival of potato blight seven years later.

The Kilrush Poor Law Union comprised 13 electoral divisions, apparently coinciding with the 13 civil parishes of the Loop Head peninsula in west Clare. At the time, on the eve of the devotional revolution, each Catholic parish comprised two civil parishes; as more priests became available, the Catholic parishes were subdivided. Today, the area comprises 12 Catholic parishes, but re-amalgamation beckons as vocations continue to decline. Famine era priests of these parishes, such as Fr Tim Kelly (whose statue still stands in Kilrush church), Fr Michael Meehan (of the Little Ark), Fr Michael Comyn and Fr “Parliament” Malachy Duggan (who died of cholera in 1849), played a huge role in lobbying central government for relief measures for the poor as the Famine took hold.

As the economic situation got out of control, the Kilrush board of guardians, chaired by the principal local landlord Crofton Moore Vandeleur of Kilrush House, lost its economic sovereignty, to be replaced by a troika comprising the vice-guardians Edmund Kelly and Michael Meagher and Poor Law inspector Capt Arthur Kennedy. Kennedy and the Catholic clergy were soon acknowledged as the true friends of the poor and starving.

Kennedy’s long lists of those evicted in the Kilrush Union, and his increasingly angry commentary accompanying those lists, were sent almost daily to the authorities in Dublin and London and served to highlight the gravity of the unfolding crisis.

A correspondent of the Illustrated London News visited Kilrush in late 1849 and his sketches, including one of Miss Kennedy distributing clothing at Kilrush, and those of deserted villages at Killard, Moveen and Tullig, have become the iconic images of the Famine.

While it is debateable whether famine conditions in Kilrush were quite as severe as in Skibbereen or Clifden, the writings of Kennedy and the anonymous Illustrated London News correspondent have combined to ensure that the Kilrush situation is undoubtedly the best documented.

Miss Kennedy was Capt Kennedy’s eight-year-old daughter Elizabeth Henrietta, born in Canada while her father was serving there as an army officer. She started by giving away some of her own clothes, but her charitable efforts were later supported by such as the Earl of Arundel and Surrey and the Catholic bishop of Killaloe, who sent £10 “to dispose in clothing the naked”. In later life, Elizabeth married and became the Countess of Clanwilliam and a mother of eight.

While Kennedy himself came from the landed gentry and went on to a long and illustrious career as a colonial administrator in various parts of the British Empire, it is reported that during the worst moments of his three-year stint in Kilrush he feared if he met a landlord, he would have reached for his gun and shot him. His relationship with Vandeleur became strained, to the extent that Vandeleur sued him unsuccessfully for libel.

On the one hand, Crofton Moore Vandeleur’s father John Ormsby Vandeleur is acknowledged as the builder of modern Kilrush, but on the other hand his son Hector Stewart Vandeleur is today still reviled locally for further mass evictions during the Land League era. Hector’s mother, Grace Toler, was the granddaughter of John Toler, an MP who was made Earl of Norbury and appointed chief justice of the Irish common pleas in return for supporting the Act of Union. Lord Norbury soon developed a reputation as a notorious judge with a penchant for hanging. Those he sent to the gallows included Robert Emmet.

Such are the varied roots of the aristocracy that by contrast the saintly Miss Kennedy’s numerous aristocratic greatgrandchildren range from the current Earl of Clanwilliam to the renegade Lord Lucan. It is hoped that some of them may attend the 2013 National Famine Commemoration, over which President Michael D Higgins will preside in Kilrush on Sunday, May 12th and at which the Kennedy family will be particularly honoured. A programme of local commemorative events throughout the former Kilrush Poor Law Union leading up to the State ceremony begins on Friday, May 3rd. Details are at faminecommemoration2013.ie and the descendants of all who lived in the former Kilrush Poor Law Union during the Famine are invited to attend.