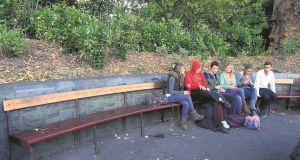 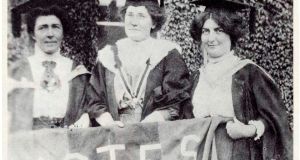 In 1905, Mary Ann Kelly persuaded her adoring husband to sell his Kilkenny farm and buy her a drapery shop in Rathangan, Co Kildare. She was not unusual in her aspiration. The number of women drapers in their own right (not the wives of male drapers) rose by 40 per cent between 1891 and 1911.

More Irish girls and women than ever before, of all social classes, were leaving home regularly to take part in some kind of public life – work, schooling, buying and selling, activism and entertainment. Trades of all kinds struggled against the ready-made goods in shops, but female dressmakers and milliners (often working for and in drapery shops) held their own, as demand for reasonably priced, fashionable women’s clothes soared.

While factory workers and servants saved their finery for their time off, teachers, nurses, secretaries, clerks in offices, telegraphists and telephonists needed to look presentable all day, every day. Their numbers rose dramatically in the quarter-century before the first World War.

National school teaching was the great career opportunity for girls from skilled working-class and small-farming backgrounds in Ireland. On-the-job training was sometimes paid, and scholarships increasingly available, so the burden on low-income parents was bearable. The first female president of the Irish National Teachers’ Organisation (1912-14) was Catherine Mahon from Birr; her parents were domestic servants. (National teaching was a lifelong job; the marriage bar was only introduced in 1933 for those qualifying on or after that date.)

Nursing was another lifelong career opportunity; a trained nurse could work in a hospital or on a private basis in the community, or for the Poor Law Union or Lady Dudley or Jubilee nursing associations. Women in jobs like these were the backbone of the cultural, political and social organisations that sprang up all over the country from the 1890s.

Annie MP Smithson, who took part in revolutionary nationalism and later became a prominent trade unionist and popular novelist, was a community nurse in the first two decades of the 20th century. Women from Jacobs Mills took part in the 1916 Rising, and factory workers on the island as a whole were also active in “war work” in 1914-18, nationalist organisations and Ulster unionism. In Dublin, Limerick and Cork they attended Irish classes and took part in amateur dramatics.

Women’s factory work was mostly concentrated in the spinning mills and weaving and shirt factories of Belfast and Derry, which employed tens of thousands of women. Textiles also employed Munster women, though on a much smaller scale; the main factory employment of women outside Ulster was food processing of various kinds – biscuit-making, confectionery, jam-making and butter-blending. Meanwhile, “monster houses” (department stores) in cities and towns hired attractive and well-spoken young women as sales assistants. They usually lived-in, in dangerously cramped dormitories, and were on their feet for 12-hour days with only short breaks – but considered their jobs more desirable than domestic service.

Desirable or not, domestic service occupied 30 per cent of the Irish female workforce on the eve of the first World War. Always the default occupation for girls whose parents could not afford to put them to a trade, service could be a good or a bad job, depending on the employer’s sense of responsibility and the servant’s ability to learn on the job and “better herself”. Unless they were especially skilled (eg as a cook or a ladies’ maid), women did not usually remain in service beyond their late 20s.

Having room and board enabled a servant to save for marriage to a sweetheart at home or to one of the tradesmen she had ample opportunity for meeting in town. The great advantage domestic service had over factory and shop work was that the servant could pace herself and work unsupervised; the downside was that she was always on call. But servants were not cut off from the spirit of the age, and employers’ complaints indicate that by 1911 they were becoming more insistent on their time off. Many rural domestic servants bought bicycles on hire purchase, shortening the distance to friends, dances and home. Most adult women carried out daily life-maintenance of cleaning, cooking, organising and foraging, usually alongside looking after the young, old and sick.

Most dwellings in town and country, even the modern local authority “cottages” built from the 1880s onwards, lacked piped water (not to mind gas/electricity), which made this work unimaginably hard. Many of these women were the wives of farmers, shopkeepers and artisans, and often worked the farm or business with their husbands. Farmers’ wives moved increasingly into poultry-rearing towards the end of the 19th century and the money they made was theirs to dispose of, giving them a degree of economic independence unknown to many urban women. Also, female farmers in their own right made up 14.7 per cent of all farmers in 1911. Some were single, but most were widows living with married offspring and their families. The fact they were deferred to as heads of households, if only on the census form, indicates the authority that went with the title “farmer” was not necessarily masculine.

Females often wielded formidable authority in the home, but females as figures of public authority – the national teacher, the community nurse – were also becoming commonplace at this time. Most authoritative of all were the thousands of nuns working as teachers, nurses, outreach workers and administrators. Often representing state as well as church authority, they set a powerful example of a path that diverged from marriage and motherhood, and normalised spinsterhood as a way of life.

And what about Mary Ann Kelly? Her drapery business thrived, with plenty of custom from farmers’ wives in Rathangan’s prosperous hinterland. However, her husband, left in charge of the money, spent most of it on the Curragh racecourse. One of their many children was the novelist Maura Laverty (1907-1966), who wrote about the sharp-tongued mother she feared and respected and the gentle, idle father she loved. Mary Ann’s story is an example of how women’s working lives, whether married or single, were hedged around by family concerns and constraints.