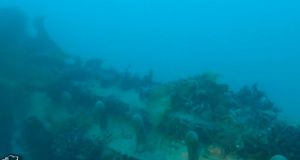 On its very first sonar pass of the season, the Canadian Arctic research vessel Martin Bergmann spotted a shipwreck on the sea-floor off King William Island. So it was that on September 3rd last, Bergmann became the first vessel to sight a legendary Arctic ghost ship, HMS Terror, since 1845.

On July 26th of that year, two whalers in the north of Baffin Bay observed Terror and her consort, HMS Erebus, moored to an iceberg at the entrance to Lancaster Sound. The two stout little vessels, commanded by celebrated Arctic explorer Sir John Franklin, seemed to be waiting for the ice to clear so they could enter the fabled North West Passage.

Reinforced for the pack ice, equipped with new steam motors and victualled for three years, Erebus and Terror were expected to become the first ships to navigate a northern route from Atlantic to Pacific. Instead, they vanished from history, transformed into myths that endure to this day.

None of the 129 crewmen was ever seen alive again except by Inuit hunters, who encountered a few starving survivors trying to escape south across “the Barren Lands”.

Years later their weathered bones, some marked with the knife-cuts of cannibal butchery, told search parties – there were to be at least 30 – more than they wanted to know about the fate of Franklin’s sailors.

But the ships themselves had vanished and the only written clue to their fate was discovered in 1859 by Capt Francis McClintock, a Dundalk-born Royal Navy officer and expert Arctic explorer.

Preserved in a metal tube in a cairn on the north west coast of King William Island, the hastily scribbled note said that Erebus and Terror had been abandoned nearby on April 22nd, 1848, after two years trapped in unyielding sea ice.

Sir John Franklin himself had died – of unspecified causes – the previous year. The surviving crew, now reduced to 105, would attempt to make their way south via Back’s Fish river.

So the mystery was solved. Except that two years ago it turned out it wasn’t. And the man at the heart of this new twist to the tale is another Irishman, Terror’s commander Capt Francis Rawdon Moira Crozier, a solicitor’s son from Banbridge in Co Down.

The plot began to thicken in September 2014 when a new underwater search effort – supported by the Ottawa government and sponsored by Canadian tech billionaire Jim Balsillie – discovered the wreck of Terror’s consort, HMS Erebus, in Queen Maud Gulf. This was some 160 km to the south of the point where she and Terror had been abandoned. Had Erebus been dragged south in the ice before she foundered? Or did some of the crew, realising the futility of trying to escape overland, return to her and, finding her broken free of the ice, try to escape in her westward?

Early reports from this month’s discovery make the latter explanation seem more likely. According to the Arctic Research Foundation, which organised the search, Terror has been found in a large sheltered bay – coincidentally named after her – on the southern coast of King William Island.

First images of the wreck suggest that an anchor had been deployed before the ship gently settled to the sea-floor. This would not have been done while she was caught in the sea ice.

And it would seem unlikely that ice currents could have carried Terror there from her place of abandonment up the west coast, passing clear around the island’s southwestern point – later, unwittingly, named Cape Francis Crozier in tribute to Terror’s lost captain.

By far the most experienced polar navigator on the expedition, Crozier must have abandoned the ships with reluctance, perhaps under pressure from rebellious officers. He would have known how unlikely it was that any British sailor – badly dressed, ill-equipped and weakened by scurvy – would survive the vast Barren Lands.

It now seems likely that he or some other of his crew returned to the ships after the ice in Victoria Strait underwent one of the unpredictable break-ups characteristic of that region.

With many of the crew trudging to their deaths on land, there would have been too few men left to handle both vessels. Erebus, 13 years newer and much the faster ship, would have been the natural choice for an escape vessel. Terror might have been laid up in hope of salvage, battened down at anchor in sheltered waters later unwittingly named after her.

This is mere surmise and, even if it were proven correct, the rest remains, as ever, a mystery. Was Erebus trapped in the ice again, 70-odd kilometres to the south, where she was found two years ago? Did the remaining crew die of starvation or scurvy? Or was Erebus crushed in the ice, leaving her men to drown or die slowly ashore?

The ships’ papers, never found, might provide a clear answer. It seems highly unlikely that they will ever turn up, having survived the sea and the elements. But as anyone who has followed the twists in the Franklin mystery knows, highly unlikely is not that unlikely at all.

Ed O’Loughlin’s latest novel, Minds of Winter, is based in part on events surrounding the Franklin expedition. It was published by Riverrun last month.

Adam Driver: ‘Acting is not glamorous in its making’
7