An Irishman’s Diary: The waggle dance of the honey bee 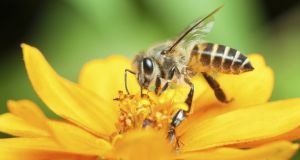 For some it is the stretch in the evenings or the brighter mornings or the yellow burst of daffodils. And then there are those of us for whom spring has not quite sprung until the honey bees gingerly emerge from the hive after their winter hibernation.

Bees form a winter cluster in the hive when temperatures drop down to 50 degrees. There they surround the queen bee, constantly fluttering their wings and expending their energy to maintain a steady temperature.

Their food source during these fallow months is the honey the beekeeper has deliberately not removed at harvest time.

Honey bees are truly amazing creatures. They can travel up to 5km from the hive in search of pollen. They have an ingenious ability to communicate to their community just where they sourced the pollen – the waggle dance.

Last year researchers at Sussex University completed a decoding of the waggle dance – the mechanism by which bees communicate inside the hive as to where to find the best food sources. By noting the angle of the dance in relation to the sun and the length of time the bee waggles its abdomen while moving in a figure of eight pattern, researchers were able to map the distance and location of where the bees were foraging. In summer bees can cover up to 15sq km as compared with 0.8sq km in spring.

The decoding of the waggle dance was undertaken by Karl von Firsch, an Austrian, who was awarded a Nobel Peace Prize for his research in the early 1970s.

March is a difficult month for bees in these climes because a colony will endeavour to increase in size with the queen to start laying and the bees will venture outside to find pollen and nectar to feed the new arrivals. But if pollen is in scare supply, the bees may still need to rely on their winter food stores or the vigilant beekeeper to provides some emergency supplies

Throughout the winter the average hive has about 10,000 bees in residence and this will increase to around 50,000 in mid summer.

society I became a member of the Connemara Beekeper

s’ Association when it was set up four years ago by a number of enthusiasts including Gerard Coyne.

A new initiative is the Native Irish Honey Bee Society which is dedicated to the study, improvement and conservation of the native honey bee (Apis mellifera mellifera). Members of this cross-border group are strongly opposed to the import of bees into Ireland.EU legislation prohibits imports of bees from third countries.

“The dark European honey bee (Amm) is native to north western Europe and is suitable to our cool oceanic climate,” Coyne tells me.

Global honey supplies have been badly affected by the drop in production because of disease and related issues. One of the most sensational cases of food fraud in the recent decades involved the trans-shipping of highly contaminated “honey” originating in China and routed via Singapore for importation into the United States. This case involved executives from Alfred L Wolff, a German food ingredients company, and a raft of compliant retailers in the US.

Some years ago the Pulitzer prize-winner Andrew Schneider produced a startling study showing that most honey on sale in shops across the US was not real honey.

Right now the bees are tidying up their hives, spring cleaning and preparing to remove excrement and dead bees. A few sunny warm days will see them emerge and have the hive ready for the queen to start laying in excess of 1,000 eggs per day.

And in the coming weeks as I wander the side roads of Cleggan and Claddaghduff and spot honey bees sapping pollen and contributing so much to the pollination process, I wonder if the bee or mankind makes the greater contribution to our planet.

Certainly the bee does less damage.