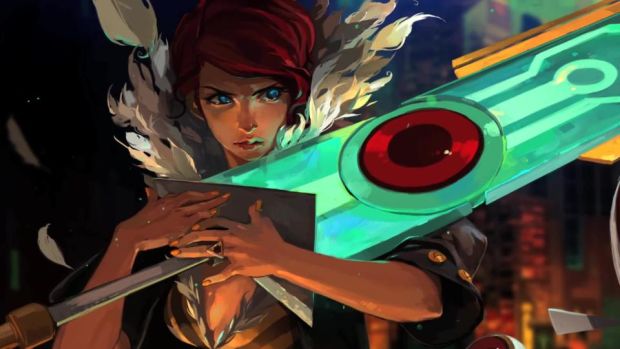 Transistor’s tone and intentions could be summarised in two words: “come closer”. The player is frequently asked to come closer to examine oddities, portals and consoles, as Transistor makes a point of gently encouraging curiosity and a sense of adventure.

You play Red, a popstar and reluctant revolutionary on a strange fact-finding odyssey. Your travelling companion is a talking machine that looks like a cross between a broadsword and amplifier. He is a voice without a body; you are a singer who’s lost her voice.

On this journey through a deserted, futuristic metropolis, you uncover a bizarre conspiracy and encounter hostile, organic-looking machines and mysterious monsters.

Not surprisingly coming from the makers of Bastion, Transistor is sophisticated and elegant. The city looks like a cross between Blade Runner, cyberpunk, anime and pop art, with glowing embers of neon, hazy colours and light refracted in lens flares. The sound design is lovely, with velvety voice acting and a singular score that mixes harps and accordions with synths and trip-hop beats.

For a third-person action game, Transistor has an almost leisurely pace. This will alienate some, but many gamers (including this one) will be happy to roam the city, piece together the jigsaw story (part Orwell, part Chandler) and become bewitched by its odd-couple characters and strange sights and sounds. Even the dialogue is enjoyably stylised: “You’ve reached the hopefully not permanent absence of Mr Nobody,” says a voicemail.

The gameplay is distinctive, a mix of traditional third-person combat (using both melees and projectiles) and a real-time strategy game. Freeze time, plan your move and then watch the attack unfold. Transistor is a subtle, captivating neo-noir. super giantgames.com