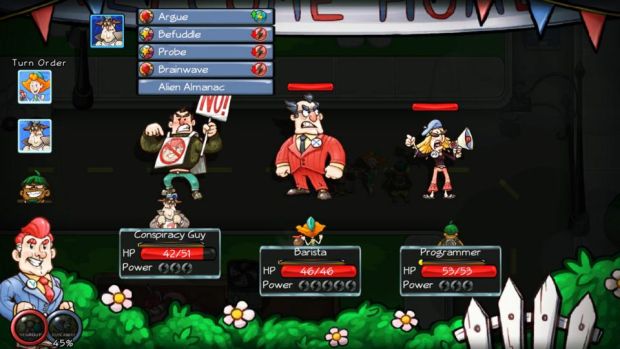 If nothing else, Citizens of Earth boasts a fabulous title. Those three words are so evocative, conjuring images of old sci-fi, from The Day the Earth Stood Still to the infamous Orson Welles prank.

This role-playing game is retro in other ways too. While it has the aesthetic of American culture of the 1950s, it also resembles old RPG such as 1994’s Earthbound.

The story follows the Vice President of the World, who looks like a splice of Conan O’Brien and Mitt Romney. Still living with his mother and hanging out with his teenage brother, the Vice President (who the player gets to name) notices some strange goings on in his local town. It starts with sentient, running java beans, and then escalates to hostile half-phone deer called “telefauns” (who hit you with a “roaming” charge) – and gets weirder from there.

Along with the puns and slapstick, it also sometimes tries its hand at modern satire. When entering a hipster café, the game warns that “Guys with beards don’t like being disturbed from their coffee”. Aint that the truth.

This is a cute, reasonably funny game, though possibly too genteel for many tastes. Younger RPG fans, accustomed to the pomp of recent Final Fantasies, the game-play of Dragon Age or sweep of Skyrim will be disappointed. But those who enjoy gently exploring, strategic and dense turn-based combat and groan-inducing puns could do far worse. It’s presented nicely, with rudimentary but colourful graphics that look like an Archer comic.

The biggest problem is one that’s common to low-fi RPGs – because it’s often a thicket of menus and wandering, it stands or falls on its humour and personality. And while Citizens of Earth is charming, its pacing and humour can’t hold a candle to the likes of Monkey Island or the recent South Park: The Stick of Truth. With nice graphics and effective turn-based combat, Citizens of Earth is a likeable nostalgia trip, but world domination remains beyond its reach.

Writing against the current: challenging the precedent in unprecedented times

Dinner in America: cringe-making firecracker of a comedy