Before today’s announcement, we make a stab at predicting who is going to figure

Before today’s announcement, we make a stab at predicting who is going to figure in the Best Picture nominations. Have your bookie’s number to hand. Video: Reuters 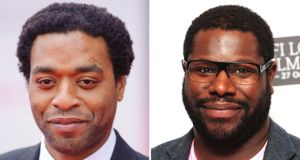 12 Years a Slave star Chiwetel Ejiofor (left) and director Steve McQueen. The film is expected to lead the UK charge for Oscar glory when the Academy Award nominations are announced. Photographs: PA Wire

The goats have been slaughtered. Their entrails have been spread about the place. And we can now make a fairly good stab at assessing who or what is going to figure in each of the major races. As we noted in an early post, this has been an interesting Oscar season.

We haven’t had the mad switching of favourites that characterised the competition 12 months ago. Instead, it has — in best picture terms, anyway — been a tight fight between three main players: Steve McQueen’s 12 Years a Slave, Alfonso Cuáron’s Gravity and David O Russell’s American Hustle.

I am reluctant to draw any significant conclusions from the Bizarroworld that is the Golden Globes. It is, however, amusing to note that by giving Slave best drama, Hustle best comedy and Gravity best director, they seemed to be doing their best to confirm all the punters’ predictions.

If anything has shifted in that competition over the past few months it is that American Hustle has — bafflingly, as far as I am concerned — cemented its position as a serious challenger. It would now be only mildly surprising if it took top prize at the Oscars.

This, despite the fact that it looks awfully like Argo. After all, they don’t much like space movies at the Oscars (none has won) and there is, alas, every possibility that the steak-eating squares — a large contingent — won’t have bothered to put the screener of 12 Years in the DVD player.

Meanwhile, The Butler looks to be the film will end up being conspicuous by its absence. It has not figured nearly so strongly in Guild award nominations as expected. Then again, Harvey Weinstein is handling the publicity. So, don’t rule it out.

Here’s an interesting thought. The Globes reminded us that we may be left in much doubt as to which film will win until the final envelope is opened. A strange, unprecedented consensus exists among Oscar pundits. Over at Gold Derby, the majority has 12 Years winning best picture, but Alfonso Cuáron taking the best director prize.

This is something to do with Alfonso’s more comfortable commercial presence. I currently see Gravity winning picture and director. But the Derby theory is not altogether absurd.

Anyway, if Hustle picks up the acting gongs and Gravity takes director and most of the technical awards, it is still not out of the question that 12 Years could pull it out at the end. In short, it will probably be worth staying up.

As far as best director goes, we can — last year’s strangeness noted — use the Director’s Guild of America’s shortlist as a reliable guide. They’ve gone for Cuáron, McQueen, Russell, Paul Greengrass and Martin Scorsese. The only one I worry about there is Marty. Wolf of Wall Street has as many enemies as friends. But I still see him sneaking in. So, I’m going with the easy option here.

Actor is an interesting one. The rising force here has been Matthew McConaughey for Dallas Buyers Club. Meanwhile, Robert Redford (not nominated at the Screen Actors Guild) is fading a bit. I’m pretty happy with my prediction of nominations, here. But almost anybody could win. Can DiCaprio make it in? Certainly. But I think Tom Hanks a smidgeon more likely for the last place.

By contrast, Cate Blanchett has been marching towards best actress success since Blue Jasmine opened in the US during the summer. She’s surely now unstoppable. Sandra Bullock, Judi Dench and Emma Thompson have turned up in most places. The last spot is between Amy Adams and Meryl Streep. Tricky, tricky, tricky.

There’s been a real swing in the best supporting actor odds over the last month or so. At one stage, our own Michael Fassbender looked home and dry for 12 Years a Slave. But Jared Leto’s character ticks so many boxes in Dallas Buyers Club — severely ill, cross-dressing — that he must be seen as classic Oscar fodder. Leto is a big, big favourite. One interesting point: if James Gandolfini makes it in for Enough Said then sentiment could carrying him to the prize. Just watch.

There have been further cyclonic changes in the best supporting actress system. Way back, in the 12th century, Oprah Winfrey looked likely to walk it for The Butler. Then she kept failing to turn up in shortlists. It is rare for an actor to win an Oscar without a respective nomination at the Globes — Oprah was, indeed, not short-Globed — but if she gets nominated here, then feeling could swell. But Lupita N’Yongo looks the favourite for 12 Years a Slave? Speak not so quickly in The Age of Lawro.

Ms Jennifer Lawrence has been unstoppable this year. There is every chance she could become the first actress since Katharine Hepburn to win successive awards. Despite the Globes snub for Oprah, those three seem safe to me.

We’ve included a few other awards for your perusal. As far as best film goes, the Academy can select between five and 10 pictures. Since that rule came in, they’ve gone for nine each time. So we’ve taken that as our guide and added a list of potential toppers up.

As ever (do I need to say this?) these are not my favourites among the candidates. They are merely the ones I think likely to get nominated. In each case, I have listed in order of likely inclusion. So, here we go. The nominations arrive at lunchtime on Thursday.

A topic they will want to recognise. But have the voters watched the bleeding film?

Beats me, guv. But they seem to love it.

I hereby predict it will get as many as five nominations and win nothing.

THE WOLF OF WALL STREET

Scorsese has been nominated for four of his last five films. So, it’s surely a cert. Can’t win, though.

Alexander Payne makes the kind of film the voters understand.

Has been rising slowly throughout the season. By no means a sure thing, mind.

One of the great surprises of the gong marathon, Spike Jonze’s metaphysical romance came third in Metacritic’s tabulation of end-of-year polls. Suddenly, it’s a contender.

It has received rave reviews and a top prize at Cannes. But it has squatted in the shadows at most of the ceremonies. In peril.

If there are 10 nominees: one from Dallas Buyers Club, Blue Jasmine, Saving Mr Banks, The Butler.

ROBERT REDFORD (All is Lost)

THE WOLF OF WALL STREET