Who Is Dayani Crystal

Who Is Dayani Cristal - trailer 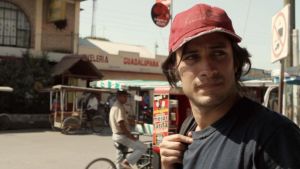 Film Title: Who is Dayani Crystal

There are problems with this sincere, elegantly shot documentary on the plight of illegal immigrants to the US. The voiceover occasionally gives in to sentimentality. The decision to have a movie star – the always-charming Gael García Bernal – walk in an immigrant’s shoes invites accusations of poverty tourism. But the picture succeeds in reminding us that complex human stories lurk behind each journey.

Who Is Dayani Cristal? is also very good on the economic and social background to immigration. Barnal and director Marc Silver argue their case forcefully without ever dipping into polemic.

The title character enters the story as an unidentified body. Located somewhere near Tucson, thecorpse had twith the words “Dayani Cristal” tattooed on its chest. The film sets out to tell the immigrant’s story in two entwined strands. Arizona state officials attempt to identify the man by examining the remains. Mr Cristal’s family talk us through the details of his life: his relationships, his worries, his interests. It transpires that he was a Honduran man with a sick daughter who bolted for the US after being saddled with insurmountable debts.

Meanwhile, Bernal retraces the late man’s journey. He chats compassionately to those he meets. The camera soaks up the atmosphere. Shots of an army of immigrants squatting on train’s roof fairly take the breath away.

Those sequences with the star are occasionally a little awkward. But Silver makes sure to bolster the film with hard-edged references to the withering economic effect of free trade and the US’s asymmetric attitudes to visa provision. It gets at the heart. But we also learn sober truths.