Watch: Jack Nicholson psyching up for The Shining’s axe scene

Footage of Jack Nicholson preparing for his famous 'here's Johnny' scene in the 1980 movie 'The Shining' has emerged. 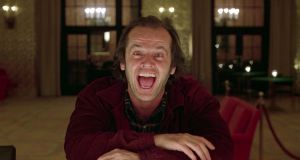 Here’s Johnny! Jack Nicholson gets in the mood for the famous axe scene in ‘The Shining’ 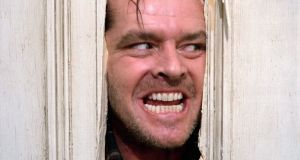 Axe happy: Jack Nicholson in The Shining. A video has come to light shows how he got ready for the famous axe scene in the film

Method actor Jack Nicholson puts more into preparing for a role than most, but we don’t often see him psyche himself up for a big scene.

Now, rare footage from behind the scenes of The Shining has resurfaced, showing Nicholson jumping up and down, practising swings with an axe and muttering “die” and “axe murderer kill!” ahead of his famous “Here’s Johnny” scene.

The 1980 horror film, based on a novel by Stephen King, depicts the descent into madness of recovering alcoholic Jack Torrance. Torrance takes a job as an off-season caretaker and moves into the famously sinister Overlook Hotel with his wife Wendy (played by Shelley Duvall) and son. Needless to say, terror ensues.

Nicholson can be heard saying “come on, come on!” to himself as he gets ready to portray the character’s brutal attack on his wife.

The scene took three days to film, and Nicholson reportedly tore down almost 60 doors in the process. The legendary “Here’s Johnny” line was improvised by Nicholson, and nearly wasn’t included in the final cut.

He received widespread praise for his performance, and the scene has frequently made its way into lists of the scariest movie scenes of all time.

The Streets: None of Us Are Getting Out of This Life Alive review – Unoriginal material
Real news has value SUBSCRIBE