True Fiction: A horror story that will appeal to Stephen King fans 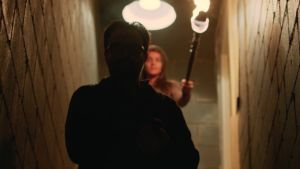 In the unlikely event you miss the crossover with Misery, this nippy Canadian horror repeats a line almost verbatim from that script (it might constitute a spoiler to say which).

Here is a story that will appeal to Stephen King fans, but the dynamics are very different to those of the earlier film. The writer seems to be the malign force. The fan seems to be the victim. At various points, that relationship looks set to reverse itself. A hit at various horror festivals, Braden Croft’s film deserves to prosper on its arrival to streaming services. Those swerves are worth savouring.

Events kick off with Avery Malone (Sara Garcia), a librarian with ambitions, interviewing for a job as assistant to once acclaimed – now artistically marooned – horror writer Caleb Conrad (Jason Cassini). Not knowing she is in a film (who does?), she happily travels to his remote home and almost as happily agrees to take part in a macabre project.

Conrad wants Avery to be the guinea pig in his investigations into terror. A lie detector is involved. She is forced to watch disturbing images in a manner similar to the protagonists of A Clockwork Orange and The Parallax View. Eventually, she finds herself trussed up in a sort of sensory deprivation apparatus. These are things they don’t warn you about in secretarial college.

There is quite a lot to swallow here. Avery is an admirer of Conrad, but even the most devoted stan (almost certainly the right term in this context) would balk at this class of life-threatening degradation. As events progress, however, the ever-heightening tension and the intriguing double-crosses nudge aside any such reservations.

Garcia has just the right purse-mouthed energy for a wised-up Final Girl of the current century. Cassini has more fun still with a pompous variation on certain caricatures of the horror novelist. In real life these people are no less threatening than the average Sunday-school teacher. This version veers between bland professionalism and calculated malevolence. He’s part Garth Marenghi, part Dr Phibes.

Budget restraints are evident. The script sometimes strains to make sense. But Braden Croft makes an efficient chamber piece of the final act. Satisfying for those on board with the genre. Available to stream on Google Play and YouTube.

William James: in praise of the Irish goodbye
Real news has value SUBSCRIBE