Time Out of Mind Review: Richard Gere excels in this meditation on homelessness 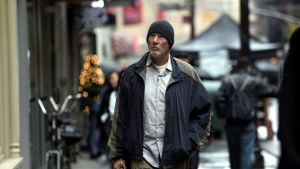 This isn’t a comeback; it’s a revelatory turn: Richard Gere in Time Out of Mind

Film Title: Time Out of Mind

A building manager (Steve Buscemi) gently shepherds homeless George Hammond (Richard Gere) out of the derelict apartment where he has been sleeping in a bathtub.

George mumbles something about “waiting for her”. Perhaps he’s referring to his estranged daughter Maggie (Jena Malone) or the ex-wife, who has, we learn, died from cancer.

Perhaps he’s in too much of a fug to know what he means: “I’m just a fuck-up. Probably always was,” he says later. By then, we’ve watched him riding aimlessly around on the subway, slouching on park benches, panhandling for small change, and staying over at Bellevue, the largest homeless shelter for men in Manhattan, a dangerous place fraught by racial and social divisions.

There is some business about identification. Might he be able to get a birth certificate? As things stand, he has no form of identification, no address, no social security number and no means. There is some pleasing banter with Dixon (Ben Vereen), another homeless man and a former jazz musician.

Three years ago, critics saluted Gere’s Golden Globe nominated “comeback” performance as a hedge-fund patrician in Armitage. This isn’t a comeback; it’s a revelatory turn, one that perfectly captures the hopelessness and nothingness of a life that has fallen through every conceivable crack. Using long and (often) clandestine lenses DOP Bobby Bukowski brings both keen authenticity and a pervasive sense of alienation to the protagonist’s meanderings.

Sean Baker’s Tangerine aside, the disenfranchised are seldom acknowledged by contemporary US cinema. Everyone listed in the final credits – especially writer- director Oren Moverman – should feel proud of their involvement.

Duffy says she was ‘raped, drugged and held captive’
8