This portrait of a mad-as-hell musical feminist who wouldn’t take crap from anybody is an uplifting, unforgettable documentary 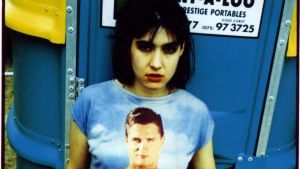 The Punk Singer begins as it means to go on: with a feminist battle-cry from Kathleen Hanna circa 1991: “I am your worst nightmare come to life. I’m a girl that won’t shut up. I’m going to tell everyone!”

Thus began the age of the riot grrl, a noisy, liberating thrust towards gender equality and rocking good tunes. Musically, Hanna’s Bikini Kill (and her subsequent adventures with Le Tigre and Julie Ruin) was post-DC punk, post-Pixies and post-no wave, a noisy, rebellious sister to grunge’s sludgier sounds. Culturally, it was a furious response to date rape, political correctness and an increasingly sexualised world.

Twenty years on and the riot grrls are having a moment. Two recent publications (Sara Marcus’s Girls to the Front and Marisa Meltzer’s Girl Power) have re-examined and chronicled the hitherto unheralded importance of this sassy subculture. New York University is currently collecting zines and other documents for a riot grrrl archive. And now we have Sini Anderson’s wonderfully intimate biographical portrait of Hanna.

The Punk Singer retains the DIY, handmade qualities of the very movement the former Bikini Kill mouthpiece helped birth. The girls are all present and accounted for: JD Samson and the rest of Hanna’s Le Tigre crew, the Sleater-Kinney nexus, and Queen Joan of Jett.

’Zines, a vital component of grrl culture, are explained for younger viewers and, by way of tribute, the film’s budget was provided through Kickstarter and a benefit concert by Sonic Youth’s Kim Gordon. Producer Tamra Davis, a friend of the director and the subject (both Davis and Hanna are married to former Beastie Boys) completes the circle.

There’s plenty here to savour for anyone with an interest in feminism or music or anything at all. Hanna, after all, is the woman who put Kurt Cobain in a dress and who coined the phrase “Smells Like Teen Spirit”. But this isn’t a look at a girlish undercurrent beneath rock. In common with Hanna herself, The Punk Singer puts women right in the moshpit where they belong; boys to the back, thank you.

Like any good riot grrl project, the political gives way to the personal. Much of the film is given over to the tender romance between Hanna and her husband, Adam Horowitz, who tends to her daily as she battles the debilitating effects of Lyme disease. He’s the only man in the film, in accordance with Hanna’s wishes.

That is as it should be. As Hanna once observed: “I’m not going to sit around and be peace and love with somebody’s boot on my neck”. A fitting ode to one of the late20th century’s most important voices.

Brixton remembers one of Ireland's most famous hunger strikers
6

The forgotten women in philosophy: time to set the record straight
9 Family deals with its loss as serial killer still roams free
10