The pros and cons of being murderously pregnant

Alice Lowe’s new film Prevenge is a dark comedy about a pregnant woman intent on murder. The character is a "superhero", she says, "and pregnancy is her special power” 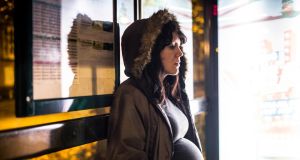 Alice Lowe in Prevenge: “There will be posters of me on buses soon. People will be saying: there’s the killer lady”

Alice Lowe is in Cardiff with a hitherto unseen star of her directorial debut Prevenge. Her newborn baby gurgles happily throughout our interview. Nothing suggests that we are with the propagators of unspeakable carnage. Filmed in the later stages of Lowe’s pregnancy, Prevenge casts the writer and director as a woman driven to murderous rampages by a voice from within the womb.

“There will be posters of me on buses soon,” she says laughing. “How will I get on the tube with my pram? People will be saying: there’s the killer lady.”

Lowe was, even before the arrival of Prevenge, a cult heroine. More than a decade ago, she appeared in the underappreciated comedy series Garth Marenghi’s Darkplace. Focusing on a pompous horror writer, played by Matthew Holness, the show has stayed in the minds of fans, but it never set in like The League of Gentlemen. Yet every day I see a Marenghi type.

“Do you?,” she says. “Ha ha. I have never heard somebody say ‘a Marenghi’. That’s great. I suppose Donald Trump is one.”

Raised in Coventry, Lowe went to Cambridge University – incubator of so much great comedy – but she didn’t get into performing until after she graduated. Old college chums Holness and Richard Ayoade, creators of Marenghi, lured her into the early stage version and she was away.

“We went to Edinburgh and that got me an agent,” she remembers. “There weren’t that many women doing comedy then I think and that helped me stand out. Soon I was getting parts on television and that was that.”

Lowe is not how you imagine her. If you’ve seen her sulking about England with Steve Oram in Ben Wheatley’s Sightseers, you’ll be familiar with her gift for passive-aggressive deadpan. In real life, with her mild West Midlands accent in place, she proves to be enormously chatty. Set her off on a topic and she won’t be back for days.

Caravans, rain, bad museums, murder: Sightseers felt like an essay on certain types of Englishness. “Yes. I think so. Because we’re both from the midlands, Steve and I had been on those holidays – though not on the killing sprees, of course. I think you have to like the character even if they are a baddie. You have to have some empathy. You are always acting out of love, not hate.”

“I got this offer to make privately financed film, no strings attached, and I thought: ‘This is such terrible timing.’ I was pregnant. I had a think and thought: ‘What would be the worst thing that could happen if we just made a film?’ I pitched this notion of a revenge movie based around a pregnant woman, thinking they’d say it was impossible to insure. They came back and said: ‘We love it.’ So we had to start in two months.”

She laughs. “I wouldn’t have written it if I hadn’t been pregnant. It also gives me permission. A lot of people might have said: ‘You can’t do that because you don’t know what pregnancy is about. It’s completely inaccurate.’ My whole point was to say: ‘Everyone is allowed their own perspective.’ It’s not supposed to be everyone’s experience. Why would you try and do that?”

There remains a cheap misogynistic misconception that pregnancy makes women behave irrationally. I wonder if Lowe has, on the festival circuit, been criticised for offering accidental support to that delusion.

“I actually thought there would be more criticism,” she says. “But I actually view Ruth as a superhero and pregnancy is her special power.”

Prevenge won’t compete with Spider-Man for box-office oomph, but, when the buses arrive, it might buoy up Lowe’s celebrity. I’m not sure she’s altogether happy about that.

“It’s nice now. When people come up to me it’s because they’re fans of obscure comedy and they’re really appreciative. If you’re really famous people just shout: ‘You’re such and such off the telly’ and walk away.”

“Yeah. Ha ha. ” She laughs a little and shudders a little. The younger star gurgles.