The Nice Guys review: we’ve seen these tricksy charms before

This film can feel like a throwback to the 1990s, but it does serve up the laughs 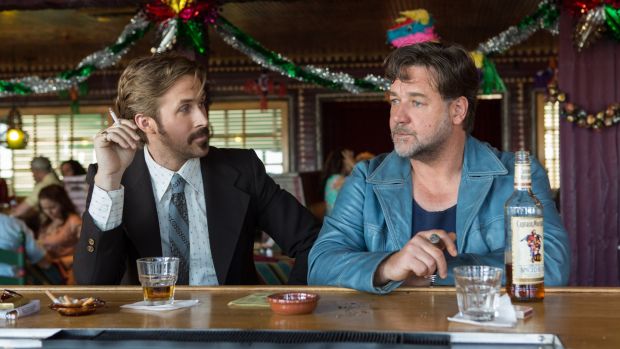 Ryan Gosling and Russell Crowe: Crowe finds the comedy in extreme boorishness and Gosling is a revelation as a buffoon with a toddler-scream.

Los Angeles. 1977. Holland Marsh (Gosling) is a drunken, widowed gumshoe working cases that might be described as a rung down from ambulance-chasing, and only then with the assistance of his wise, disapproving 13-year-old daughter, Holly (Angourie Rice).

The latest film from Lethal Weapon scribe and former Hollywood wunderkind Shane Black is, to borrow Spinal Tap’s album title: None More Black. Packed with verbal sparring and quips about the horrors of marriage, every exchange might have been culled from earlier screenplays for Last Boy Scout or The Long Kiss Goodnight.

Sample bants: “Look on the bright side: nobody got hurt,” sighs Marsh. “People got hurt”, demurs Healy (Crowe). And back to Marsh: “I’m saying, I think they died quickly. So I don’t think they got hurt.” Ba Dum Tish. Etc.

Crowe and Gosling enact this two-step awfully well: Crowe finds the comedy in extreme boorishness and Gosling is a revelation as a buffoon with a toddler-scream.

But the problem for Shane Black is, well, Shane Black. Having once made the kind of impact on the cinematic landscape that normally takes out several species, Black, with his trademark zingers, warring buddies and love of Hollywood sleaze, has lost none of his tricksy charms. It’s just that we’ve seen these tricksy charms before.

Too often, The Nice Guys feels like the Funniest Film of 1994. There are worse things.