The Legend of Tarzan review: Swings a bit far to the righteous 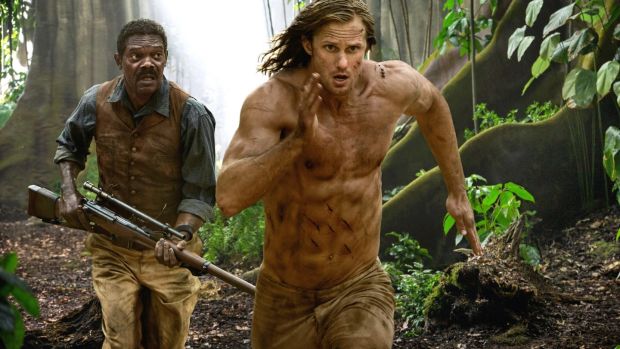 Me Tarzan, me lame: Samuel L Jackson and Alexander Skarsgård in The Legend of Tarzan

Film Title: The Legend of Tarzan

In a famous 1971 interview with Michael Parkinson, the late, great Muhammad Ali flagged certain issues he had with Edgar Rice Burroughs’s most famous creation.

“I always wondered why Tarzan is the King of the Jungle in Africa . . . I saw this white man swinging around Africa with a diaper on, hollering . . . And all of the Africans, he’s beating them up and breaking the lion’s jaw, and here’s Tarzan, talking to the animals. And the Africans have been there for centuries and they can’t talk to the animals.”

It’s a central problem that David Yates’s new film can’t overcome, but, by golly, if it doesn’t tie itself into knots trying. And so, having been kidnapped by a dastardly Christophe Waltz, Jane (Margot Robbie) is offended by his suggestion that she should scream. “Like a damsel?” she huffs, before spending the rest of the film in a white dress and requiring rescuing. Like a damsel.

Elsewhere, the original swinger is reborn – now with inguinal crease! – for an adventure all the kids weren’t waiting for: Tarzan Versus Belgian Colony Policy in the Late 19th Century! The film’s commendably well-meaning attempts to right-on-ify its source entails a plundering of history: a scramble for the scramble for Africa, if you will.

Tarzan (played by Alexander Skarsgård in a performance that makes you think: lucky he’s got that v-line) is now living as Lord Greystroke back in Blighty and taking an unholy age to return, at the prime minister’s behest, to the continent where he was raised by gorillas. He dithers long enough to allow for plenty of guff about colonial finances and to introduce real-life African-American envoy George Washington Williams, here reinvented as a Samuel L Jackson character and played by Samuel L Jackson.

Many clunky metaphors follow: Waltz uses rosary beads as a lethal weapon (get it ?) before animals and natives rise up, led by white Tarzan (and for balance, Sam Jackson) against King Leopold II, in a CG charge that makes one think, alternately, of the clunky, heavily lined dimensions of Pete’s Dragon and the gorilla-suited monkey of Trading Places.

The action sequences are well-paced and far more violent that the 12A rating suggests. But it’s still a good deal poorer than Hugh Hudson’s much- maligned 1984 reinvention, Greystoke: The Legend of Tarzan, Lord of the Apes.