The Great Wall review: A beautiful tour of Europe’s divisions 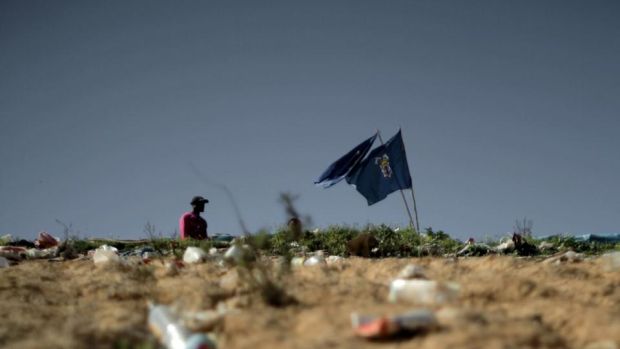 Tadhg O’Sullivan, who pulls all the levers and pushes all the buttons on this bewitching trans-European meditation, is unlikely to balk upon hearing his film described as “experimental”. Having worked as an editor on Pat Collins’s Silence, O’Sullivan is familiar with the more oblique forms of documentary narrative. Yet there is an unexpected lucidity to The Great Wall that pushes back against the e-word.

This may have something to with the source material: Franz Kafka’s allegorical story The Great Wall of China. Then again, it’s not as if that strange fragment abounds with thumping yarns. While we hear about Kafka’s wall – built piecemeal across a China of the mind – O’Sullivan’s camera takes us from the borders of Bulgaria to the City of London and on to the disturbances in Greece. In the story, the structure is built partly to repel the northern hordes and partly to instil sedative fear in the masses.

O’Sullivan seems to be arguing that borders – both literal and allegorical – are doing much the same thing in contemporary Europe. Unease is stoked about the supposed masses making their way from Africa (the script changes “north” to “south” in Kafka’s text) while financial and social structures divide rich from poor internally.

So, aggressive arguments are being made here. O’Sullivan enters the control rooms of the European border agency and allows us to join in the surveillance. The shots of Greece point towards disasters that have been and greater disasters to come.

None of this would, however, register so strongly if the film were not such so technically accomplished and so beautiful to look at.

Scored to insidious ambient music (choral and electronic), and featuring some nifty camera moves, The Great Wall is sumptuous enough to play on a loop in a gallery space (tellingly, it was made under the Arts Council’s Reel Art Scheme). Mind you, that would be the wrong place to see it. The picture belongs in the cinema and it is cheering to see it get a theatrical run in the Irish Film Institute.