The beginning of a beautiful friendship, that stretched from Trumbo to Casablanca

When I met Alice Hunter and Irene Diamond on a chance trip to Cork, I had little idea I was in the presence of Hollywood royalty 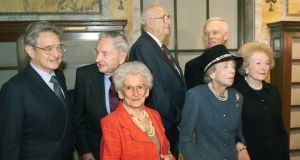 Alice Hunter said that she couldn’t believe she would never see Harrods again. But she said it to her friend Irene Diamond in New York and in as little time as suited Diamond’s business schedule in 1993, which was managed by her company secretary Vincent McGee, all three – Vinny, Irene and Alice – were in London.

Vinny, whose most recent roles include that of senior advisor to Atlantic Philanthropies and who at the time was vice president and secretary of the Irene Diamond Fund, knew Ireland well, and stretched the trip to include a visit to Cork, centred on Ballyvolane House near Fermoy. I had met Vinny previously, and his mentoring kindness hid the hyper-efficiency of his career as a consultant and activist (he worked with Amnesty International for a long time, and spent two years as its American chairman).

That is how, in 1993, I met Alice and Irene. Brief biographies do them little justice: Diamond donated more than $280 million to significant American causes. The foundation established with her husband Aaron Diamond became the largest private donor to HIV/Aids research in the US, and the couple contributed more than half a billion dollars to public health and the arts and education in America.

I found out that Irene’s earlier career in the film industry had involved Casablanca, and that Alice’s life touched somehow on Roman Holiday. As we ate in the burnished dining-room at Ballyvolane neither subject came up. This was the final night of their European holiday and I remember Irene’s glimmering elegance and Alice in subtle black, the atmosphere softened by candlelight and by the affection between these two women, both widowed, both in their early eighties. Then, for a reason I can’t remember, the question of living wills sidled into the conversation. Irene and I argued from opposite ends of the debate as strongly as courtesy would allow, while Alice (Vinny was a kind of ring-master) stayed mostly silent and then admitted some doubts.

We moved to the sittingroom. The hearth was rosy with logs, the air warmly scented, the shutters closed beneath the curtains. The dark and the windy rain seemed distant: we were in the hub of the house and at ease although still at odds. We had formed a little square of comfort, Alice and I at each side of the fireplace, Irene and Vinny on the sofa facing the crackling logs. Then Alice said she was tired, she would go to bed. As she walked past Irene, she bent down and kissed her friend’s frost-bright hair. It was like a blessing. We felt it, a pause in something we hadn’t known was happening. We chorused our goodnights just as she closed the door but before our voices had died away we heard the fall.

The Greens, Jeremy and the late Merrie, were still in the kitchen and with Vinny they rushed to the hall. Alice was carried to a ground-floor bedroom and after the rapid arrival of the doctor, Irene and Vinny began their telephone calls. Vinny went with Alice in the ambulance while I drove behind through the slashing weather in order to bring him back to Ballyvolane that same night.

Alice did not recover consciousness and died three days later in hospital in Cork. Beside her bed we found a vase flaring with crimson roses. Irene had had to return to New York; Alice’s son Tim was on his way from America.The cremation was in Dublin. And that was that. The kiss, and the roses.

And yes, Irene, who died in 2003, had been a script and talent scout in Hollywood and worked for 25 years with the producer Hal B Wallis, promoting films such as The Maltese Falcon and Come Back Little Sheba; in New York she persuaded Wallis to buy the play that became Casablanca. Alice had also worked in the film industry and indeed had a connection with Roman Holiday. Her husband was Ian McLellan Hunter, a friend and colleague of the hugely successful screen-writer Dalton Trumbo. But Trumbo, the subject of the eponymous film currently in Irish cinemas, was imprisoned and then professionally blacklisted because of his refusal to answer to the House Un-American Activities Committee during the McCarthy era. When the Oscar for the Best Original Screenplay was won by Roman Holiday in 1953, the statuette was accepted by Ian McLellan Hunter – the screenplay and its original story was the work of Dalton Trumbo, forced to remain incognito.

Hunter, whose son Tim is a prominent television producer with Mad Men among his many credits, was also was to be blacklisted. Like Trumbo he went into temporary exile, returning for a while to his native London, where his wife Alice met Harrods.

Denis Donoghue obituary: One of the world’s foremost scholars of modern literature