Australian writer-director Jennifer Kent has created a truly sinister slice of cinema with her debut movie ‘The Babadook’. ‘For me, the entry point was the idea of facing the unfaceable,’ she tellsTara Brady 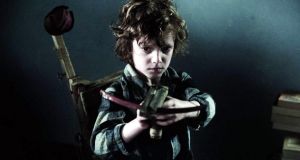 A disconcerting-looking clothbound book emblazoned with the image of a shadowy creature mysteriously appears on seven-year-old Samuel’s shelf. The troubled boy (newcomer Noah Wiseman) hands the tome to his increasingly frazzled, widowed mother, Amelia (Essie Davis), and demands she read aloud the dark nursery rhyme inside: “If it’s in a word or it’s in a book, you can’t get rid of the Babadook.”

Amelia is soon exhausted by Samuel’s repeated insistences that she check under the bed and inside the wardrobe, lest the Babadook be lurking in the gloom. But maybe, just maybe, her son is on to something.

Horror fans will already know all about The Babadook. The debut film from Australian writer-director Jennifer Kent went down a storm at the Sundance Film Festival earlier this year; the title was snapped up by IFC Midnight Films and Kent was swiftly signed by William Morris Endeavour. The last spook- house to receive such a reception in Utah was a little film called The Blair Witch Project.

Kent, a former actress who spent years honing her first screenplay, has already turned down a number of big studio offers. Fair enough. It’s difficult to imagine something as finely crafted and handmade as The Babadook emerging from the Hollywood conveyer belt.

“I’m interested in all offers,” she insists. “But if I’m going to spend three or four years of my life on something, it has to speak to me just a bit.”

Non-genre aficionados should also make time for the movie-verse’s newest monster. The Babadook is a classy, gorgeous-looking film, jollied along by complex psychology and the kind of performances and characters one might expect from someone who has worked on the other side of the camera. How did Kent’s work acting in movies such as Babe: Pig in the City and TV shows such as Country Practice shape her directorial debut?

“The main thing I learned from acting was that all actors are different, some think visually, others think emotionally,” she says. “I sometimes hear a director say: ‘Oh, that actor didn’t do what I tell them’. And I think, ‘then you’re not doing your job’. If things aren’t working and the actor can act, it’s the director’s responsibility to fix it.”

Clawed, hatted and obscured by the gloaming until his freaky stop-motion entrance, the Babadook looks and feels genuinely folkloric. Even the name sounds like an ancient thing.

“I wanted it to sound kind of annoying,” says its creator. “Like gobbledegook that a child might make up. It’s only later that the word starts to take on a more sinister meaning.”

As with the etymology, this antipodean bogeyman is entirely the product of Jennifer Kent’s marvellous imagination, with some assistance from the pop-up book illustrator Alexander Juhasz. Picture Nosferatu by Edward Gorey. Or The Cabinet of Dr Caligari by Tim Burton. Now picture hiding under the duvet from now until Christmas.

“For me, the entry point was the idea of facing the unfaceable,” says the director. “It’s someone who can’t face this really difficult dark thing in their life. So the Babadook had to reflect that.”

That dark thing, it transpires, springs from motherhood itself. Amelia, in common with We Need to Talk About Kevin’s Eva, is hardly ideal mommy material. She struggles with cuddles. Might the Babadook be a manifestation of refrigerator maternal skills? The movie keeps us guessing until the final credits.

“It’s still taboo to say that some women struggle with motherhood, but they do,” says Kent. “I always conceived of the film through Amelia’s eyes. Occasionally, we switch to Sam’s perspective. But I wanted people to feel the descent from the inside not the outside. We’re under her skin, not judging from the outside with our arms folded.”

Amelia’s emotional remove is reflected in the film’s near-monochrome palate: Polish cinematographer Radoslaw Ladczuk piles on the murky mauves. The production design echoes that effect with black cars, black cockroaches and even black roses lurking in the background.

“I originally wanted to shoot the film in black and white – much to my producer’s horror,” laughs Kent. “Instead we reduced the colours but kept the contrasts of German Expressionism. So there’s a lot of blues and burgundy. There are some greens, but they’re teal greens. It had to look as emotionally cold and uncomfortable as possible. It was all done in camera, not in post-production. So there were no browns allowed on set.”

With a side of pea soup

The Babadook seems destined to pull in an audience who haven’t watched from between their fingers since The Conjuring, or possibly The Sixth Sense. But Kent’s award-winning picture also shares DNA with early Roman Polanski freak-outs, particularly Repulsion and The Tenant. In this spirit, Essie Davis’s increasingly demented performance moves between nervous gibbering and shrieking that ought to come with a side of pea soup.

“There were times when she did lose her voice,” says Kent. “She’s a very experienced actress. But we did have to save her scream for when we really needed it.”

Davis has known Kent since college, so the necessary rapport and trust had been established long ago. But The Babadook is a two-hander, and is just as reliant on its brilliant young star Noah Wiseman, who was selected from some 400 candidates. I wonder how much the little chap knew about the film’s more disturbing attributes?

“It’s interesting,” says the film-maker. “A lot of directors will try to trick kids or surprise them. I took the opposite approach. I knew Noah needed to know the story of The Babadook. Or at least the G-rated version. We spent three weeks away before the shoot. His mum is a child psychologist. She was very in favour of disclosure as well. He became as committed as anyone else on the team. We did protect him. Anything that was inappropriate, we had an adult actor come in to cop all the abuse.”