Strangerland review: The dust devil is in the detail 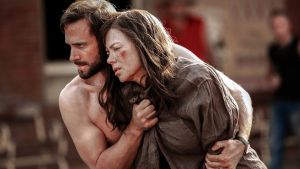 Irish cinematographer PJ Dillon brews up a terrific storm – literally and figuratively – as married couple Catherine and Matthew Parker (Nicole Kidman and Joseph Fiennes) are overtaken, then engulfed in red dust while driving through their remote Outback town. The storm adds to their growing panic: their children – including the coquettish 15-year-old Lily (Maddison Brown) and her younger, depressed brother, Tom (Nicholas Hamilton) – have disappeared without trace.

It is almost as if the same red earth has swallowed them up, a notion later reinforced by an elderly local: “First it was the white ones, then it was the black ones; kids go missing out here. It’s the land.”

Perhaps, but the sexually voracious Lily has gone missing before. Indeed, the family have moved to this far-flung Australian hamlet in the wake of the girl’s previous sexual misadventures.

It does not take long for local Detective David Rae (Hugo Weaving) to discover why the family left Canberra, or for the Parkers’ already strained marriage to implode into a series of wild recriminations: Was the teen molested by her father? Has she inherited her behaviour from her mother? “Well, she didn’t get it from me, did she?” snaps Matthew. And so on.

The theme of missing children gestures toward such Antipodean classics as Walkabout and Picnic on Hanging Rock. Unhappily, Kim Farrant’s handsome drama lacks the enigma of these pictures, and equally refuses to congeal into a suspenseful thriller. Kidman returns to the messed-up mourning that she mined so well in Birth and Rabbit Hole.

But even allowing for grief doing funny things to people, there’s no accounting for the ensuing psycho-sexual shenanigans: Catherine makes desperate lunges at one of her daughter’s former lovers (while dressed in the teenager’s clothes), at Rae and, finally, at the red-hued horizon.

She is as invigorated by her missing daughter’s sexuality as her husband is terrified. It’s an interesting enough subtext, but foregrounded, it’s not enough to carry the muddled movie that ensues.