Based on the 2000 YA novel, this is an innocent, harmless confection on Disney+ 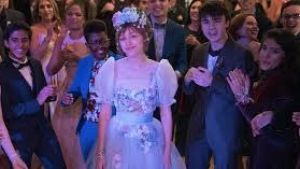 With its chipper message about non-conformity, Jerry Spinelli’s young adult novel Stargirl became a bestseller in 2000 and is often credited with either the invention or codification of the Manic Pixie Dream Girl trope.

Two decades later and she’s still the Dream Girl of your, well, dreams (or nightmares) to beat. The ne plus ultra of Dream Girls. A Dream Girl that a younger Zooey Deschanel or Zoe Kazan might baulk at for having too many Dream Girl signifiers. Like a vinyl collection or a rat named Cinnamon or homemade hipster headpieces.

Stargirl is not so much a character as a construct, something the film’s young hero Leo (Fargo’s Verchere) concedes in a closing voiceover. Presented as a series of kookily crocheted knits, green shoes, and – but of course – a raspberry beret, Stargirl is a great source of excitement when she arrives at an anonymous high school in Sort-of-Nowhere, USA. Inspired by her quirky songs on her quirky ukulele, her hitherto underachieving classmates are suddenly winning football games.

No one, however, is as smitten with her as Leo is, and the pair soon bond over tunes by The Cars and Big Star.   On a date in the desert – cue mindfulness exercises and a primal scream – Leo decides that Stargirl can control the rain. He’s also convinced that she’s the person who has been sending him new ties every year on his birthday. You see, Leo is also quirky, having developed a fondness for neckwear following the death of his dad. Thus, he has best friend who hosts a quirky school TV show and a kindly mentor who works as a palaeontologist.

It’s all very innocent. Leo and Stargirl playing Pattycakes in a montage has nothing in common with Jessica Rabbit’s version of the game. The dramatic complications, when they finally arrive, don’t scare up anything like a sense of jeopardy.

Working from a screenplay co-written with Kristin Hahn and Jordan Horowitz, Miss Stevens director Julia Hart carefully works pretty musical numbers into an already cutesy confection. Many non-teens will find themselves grimacing through the fluffy wish-fulfilment and happy-clappy life lessons.

But Stargirl, as essayed by 16-year-old Grace VanderWaal, the ukulele-wielding 2016 winner of America’s Got Talent, has a puppy-dog earnestness to recommend her. Strictly, you know, for kids.

Opens on March 24th on the Disney+ streaming service