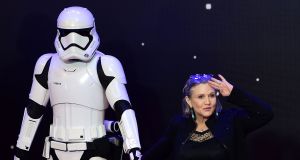 File shot from December 2015 shows US actor Carrie Fisher posing with a Star Wars stormtrooper as she attends the opening of the European Premiere of Star Wars: The Force Awakens in London. The original Star Wars movie gave her her most high-profile role, as Princess Leia. File photograph: Leon Neal/AFP/Getty Images 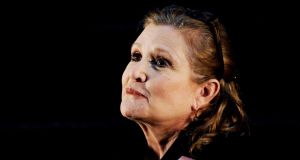 Star Wars actor Carrie Fisher has died in hospital, days after suffering a heart attack on a transatlantic flight.

The 60-year-old, who became an international screen star and sex symbol when she appeared as Princess Leia in the 1977 sci-fi blockbuster, was taken ill on a flight from London to Los Angeles on December 23rd.

In a statement released on behalf of Fisher’s daughter Billie Lourd, spokesman Simon Halls said: “It is with a very deep sadness that Billie Lourd confirms that her beloved mother Carrie Fisher passed away at 8.55 this morning.

“She was loved by the world and she will be missed profoundly.

“Our entire family thanks you for your thoughts and prayers.”

Tributes have poured in for the actor, who went on to appear in three Star Wars sequels including 2015’s seventh film in the franchise, The Force Awakens.

Fisher was a “one-of-a-kind” who lived her life “bravely”, Star Wars co-star Harrison Ford has said, adding: “My thoughts are with her daughter Billie, her mother Debbie, her brother Todd and her many friends. We will all miss her.”

Fisher had appeared to be stable in hospital in California following her medical episode on a United Airlines flight on Friday.

Her mother Debbie Reynolds tweeted on Christmas Day: “Carrie is in stable condition. If there is a change, we will share it. For all her fans & friends. I thank you for your prayers & good wishes.”

Fisher, who had been in England until recent days shooting the third season of the British sitcom Catastrophe, suffered a heart attack during a flight on Friday from London to Los Angeles. She was met by paramedics and rushed to the Ronald Reagan UCLA Medical Center.

Her death came a month after the actor and author made headlines by disclosing that she had a three-month affair with her Harrison Ford 40 years ago.

Fisher revealed the affair to People magazine while promoting her new memoir, The Princess Diarist, just before it went on sale.

The book is based on Fisher’s diaries from her time working on the first Star Wars movie.

Fisher said the affair started and ended in 1976 during production on the blockbuster sci-fi adventure in which she first appeared as the intrepid Princess Leia. Ford played the maverick space pilot Han Solo.

“It was so intense,” Fisher told People. “It was Han and Leia during the week, and Carrie and Harrison during the weekend.” She was 19 and Ford was 33 at the time.

Carrie Fisher was smart, funny, talented, surprising, and always a hell of a fun time to be around. Family Guy will miss her immensely.

Carrie was my friend. It took me three series but I got her in the end. She was the most… https://t.co/iGOLk0pUHM

She was the brightest, funniest, bravest, kindest, cleverest and sweetest person I ever knew. A crushing blow to lose @carrieffisher

I'm deeply saddened to learn of the death of Carrie Fisher. I will miss our banterings. A wonderful talent & light has been extinguished.

When I was a young man, Carrie Fisher she was the most beautiful creature I had ever seen. She turned out to be witty and bright as well.

Oh no we lost Carrie Fisher too. She was so funny and full of life. Rip. Condolences to her family and friends. We'll miss her too.

“How could you ask such a shining specimen of a man to be satisfied with the likes of me? I was so inexperienced, but I trusted something about him. He was kind,” she wrote of Ford in the memoir, the latest of several books Fisher authored over the years.

She gained sex symbol status in 1983’s Return of the Jedi when her Leia character wore a metallic gold bikini while enslaved by the diabolical Jabba the Hutt.

She returned last year in Disney’s reboot of the Star Wars franchise, The Force Awakens, appearing as the more matronly General Leia Organa, leader of the Resistance movement fighting the evil First Order.

Mark Hamill, who played the main role of Luke Skywalker in Star Wars alongside Fisher, tweeted: “No words #Devastated.”

Anthony Daniels, who played the android C3PO, said: “I thought I had got what I wanted under the tree. I didn’t. In spite of so many thoughts and prayers from so many. I am very, very sad.”

Billy Dee Williams, who played buccaneer turned resistance general Lando Calrissian alongside Fisher in The Empire Strikes Back and Return Of The Jedi, said: “I’m deeply saddened at the news of Carrie’s passing. She was a dear friend, whom I greatly respected and admired. The force is dark today!”

The show’s creator, Seth MacFarlane, said: “Carrie Fisher was smart, funny, talented, surprising, and always a hell of a fun time to be around. Family Guy will miss her immensely.”

Star Trek actor William Shatner tweeted: “I’m deeply saddened to learn of the death of Carrie Fisher. I will miss our banterings. A wonderful talent & light has been extinguished.”

Actor Whoopi Goldberg was among those paying tribute, tweeting: “Carrie Fisher has passed, she was funnier & smarter than anyone had the right to be. Sail On Silver Girl. Condolences Debbie & Billie R.I.P.”

Mia Farrow added: “Carrie was brilliant, funny and talented. Sending huge love be to her mom, her daughter, Billie and her many friends (sic).”

Fisher appeared as a guest on Irish comic Graham Norton’s BBC show at the beginning of the month to promote her latest memoir.

Norton tweeted: “Numb. Unbelievable that such a bright funny loving spark could be extinguished. carrieffisher you will be missed. I wish you peace.”

Transworld Publishers, which published The Princess Diarist in November, said in a statement: “We are shocked and deeply saddened by the tragic passing of Carrie Fisher. Our thoughts are with her family and friends.”

Actor Steve Martin tweeted: “When I was a young man, Carrie Fisher was the most beautiful creature I had ever seen. She turned out to be witty and bright as well.”

Dame Joan Collins said: “My heart goes out to Debbie Reynolds on the death of Carrie her talented daughter. There have been too many deaths this year.”

Singer Bette Midler tweeted: “Carrie Fisher didn’t make it. I am so terribly sorry, and send my sincere condolences to her family, friends and fans all around the world.”

Stephen Fry wrote: “She was the brightest, funniest, bravest, kindest, cleverest and sweetest person I ever knew. A crushing blow to lose carrieffisher.”

Ellen DeGeneres described Fisher as “a brilliant writer, actor, and friend. She was so much fun. I can’t believe she’s gone.”

Actor Adrian Grenier said: “RIP Carrie Fisher. Thank you for bringing a forceful space princess to our galaxy and for breaking stereotypes on and off the screen.”

Actor Kevin Nealon tweeted: “Thank you, Carrie, for all the excitement and laughs you brought this world. I already miss you. RIP #carriefisher.”

‘So much loss this year’

Young Guns actor Lou Diamond Phillips added his condolences on Twitter, writing: “Dear Lord, it doesn’t stop. From a teenage crush to a mature respect for your writing and wit, Carrie you will be missed. #RIPCarrieFisher.”

Canadian prime minister Justin Trudeau said on Twitter: “We’ll never forget you, Carrie. May the Force be with you always.”

Anne Enright: ‘Nuala O’Faolain was an impossible person, to whom we owe so much’
7