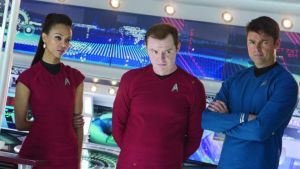 JJ Abrams’s cosmically triumphant sequel to his own Star Trek reinvention begins with a gag that neatly establishes the film’s near-perfect blend of knowing allusion and breathless momentum.

Captain Kirk (Chris Pine) and his team are evading humanoids on a brightly coloured planet. The camera swerves towards their pursuers and invites us to duck as spears are flung directly into our nervous faces. That’s what 3D is for. The early pioneers of the medium knew it. Abrams confirms it. Get angry natives to chuck stuff at us.

The film is full of such knowing winks. But Abrams’s brilliance lies in his ability to fold the references to classic Star Trek – and to contemporary politics – into a thrilling, pulpy structure that demands no foreknowledge of the ancient franchise. It is hard to believe that Damon Lindelhof, who spilt too much nerd juice into Prometheus , had a hand in the zesty, funny screenplay.

It would be a shame to give too much away. We can, however, reveal that, after breaking the rules once too often, James T Kirk is smartly busted down to First Officer. It looks as if the Enterprise team is destined for dissolution to the four solar winds. But a surprise attack on London by John Harrison (Benedict Cumberbatch), a Machiavellian terrorist, upends all the Federation’s strategies, and Kirk finds himself back on the old tub with his menagerie of differently talented officers.

Mr Scott (the erratically Caledonian Simon Pegg) is the only one to refuse service on the Enterprise – Scotty adjudges the Federation’s gung-ho plan to annihilate Harrison too risky. Mr Spock (Zachary Quinto) is also wary, but the Vulcan blood in his veins persuades him to respect authority.

The conflict between Kirk’s impetuousness and Spock’s cerebral caution has always been at the core of Star Trek ’s appeal. The first TV series, conceived in the supposedly empathetic 1960s, tended to favour humanity over comical machine logic.

The new film is very much on Spock’s side. Whereas Quinto plays the science officer as a colder version of No-drama Obama – he even reasons his way towards humanistic morality – Kirk manages to combine the dissolute booziness of early George W Bush with the bellicose irresponsibility of the later version (though Pine’s brave Kirk would never have shirked military service). Peter Weller turns up as a version of Dick Cheney to urge Captain Jerk towards ever-greater outrages, before, inevitably, our Jim reconnects with his inner solidity.

Cumberbatch’s sinister Harrovian poise and endlessly twisty face scare up more than enough menace to justify Kirk’s headlong rush towards the nuclear option. The film may be at home to post-modern jokiness, but Cumberbatch is to be congratulated for embracing all the old-school, uncomplicated values of the English villain in Hollywood. We hope to see his Sheriff of Nottingham before the decade is out.

Dedicated Trekkers will greatly savour the way Harrison’s arc echoes those in earlier stories. Indeed, the neat conceit that drove the first film – we move through an alternative universe to the canonical story – allows Abrams to litter Into Darkness with creative inversions of themes from the franchise’s glory days. A sharp blow to the head still renders all enemies unconscious. Men in red shirts look worried. There is a welcome, significant appearance by a Tribble.

For all the jumble of quotations, this strain of Star Trek still manages to carve out its own distinctive area of space. The production design has a clinical sheen that fairly strips the moisture from your eyeballs. Abrams pushes his taste for lens-flare towards agreeable self-parody. The personal relationships have a weariness that contrasts markedly with the optimism that characterised the original series.

In short, it’s utterly familiar and absolutely original. We couldn’t have asked for more.