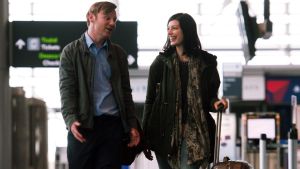 Twenty-something Alan (Gleeson) is unlucky in love and not doing so well in life, either. He has recently been jilted at the altar and the only hints at romance in his life are the scarcely disguised secret-admirer notes left for him by his mum (ouch), who is also his co-worker (ouch, again) at an information desk in the airport.

One day, between directing people toward the ATM and/or the lavatory, Alan spies his first love. He hasn’t seen Alice (Mad Men’s Paré) since their summer romance eight years previously. And now she’s stuck in Dublin on standby. Might there be a magical evening in the offing?

Standby marks the feature debut of filmmaking brothers Ronan and Rob Burke, who also presided over the most recent series of Damo and Ivor. It’s a promising, if flawed first effort.

The lighting and cinematography from experienced camera op David Grennan tends toward an artful gloom that, while consistently Fincheresque, too often obscures our view.

Pierce Ryan’s screenplay is safe and solid but often lacks sparkle. Several tropes, notably the scene in which wily old poker-playing gents wind up at a drag club, have no place in any artefact forged after the Stone Age. A subplot in which Alice conceals an unsuccessful job interview doesn’t make a great deal of sense.

Still, Brian Gleeson and Jessica Paré are awfully pretty and plenty charming. And Francesca Cherruault puts in a terrific turn as Alan’s whacky friend. Love is nice, but comic foils have all the fun.