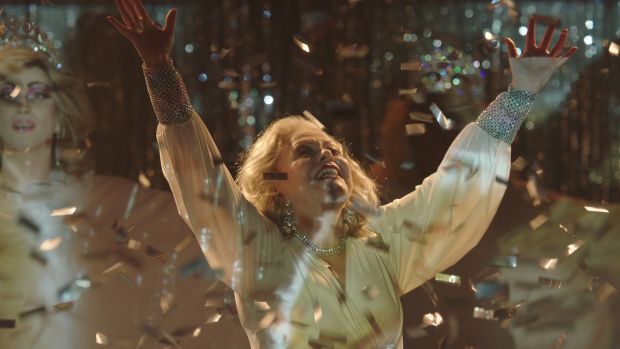 In her landmark 1964 essay Notes on Camp, Susan Sontag derided Christopher Isherwood’s two-page account of the conceit in The World in the Evening (1954) as “lazy”.

But it’s hard to argue with the Goodbye to Berlin author’s notion that “you can’t camp about something you don’t take seriously. You’re not making fun of it, you’re making fun out of it. You’re expressing what’s basically serious to you in terms of fun and artifice and elegance. Baroque art is basically camp about religion. The ballet is camp about love.”

Stage Mother, a new movie from playwright and director Thom Fitzgerald, might have been created to illustrate Isherwood’s point. The film opens with a tragedy as Rickey, a performer in a low-rent, old-school drag club in the Castro district of San Francisco, overdoses on stage.

Thus, Rickey’s choirmistress mother Maybelline (Jacki Weaver) packs her bags and leaves her homophobe husband behind in smalltown Texas so that she might bury her estranged son. She is not welcomed by Rickey’s partner Nathan (Adrian Grenier), but blonde single mom Sienna (Lucy Liu) is a friendlier face.

Maybelline gets to mothering all the queens at the failing club and puts her choirmistress skills to use as she coaxes Rickey’s “drag sisters” (Allister MacDonald, Tangerine’s Mya Taylor)and Oscar Moreno) to sing not synch.

Tina Turner: ‘I had a terrible life. I just kept going. You just keep going’